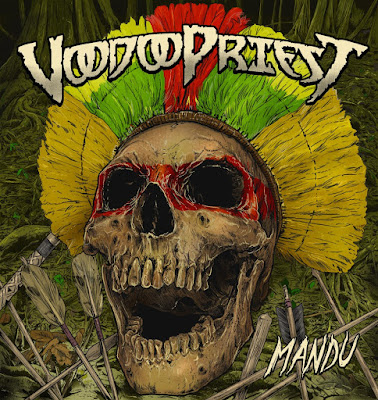 Brazil may have a thousand metal bands, but there is one that will echo through the forests with its melody touching the soul of nature while proclaiming this album 'Mandu'.
Voodoopriest is one of the most exciting bands on the national metal scene, its melody mixing Death Metal with Thrash Metal really does a uniquely weight and adrenaline when doing a job that is even difficult to comment on its excellent quality.
The first track is titled 'Dominate and Kill' and it already shows this band's strength, creativity and versatility in time to create something.
The bass sound is extremely present for a music on its fullness and the atmosphere of the album is something really alive. Easily, the listener can feel the atmosphere of forests and carry the blood of the Indians.
Guitar is working excellently while creating riffs with energy and vocals showing its weight by making the music even more interesting.
This work of Voodoopriest is really a sequence of great songs, it becomes increasingly difficult to speak of one or the other without falling into the same things to compliment them about, after all, this album deserves only praise.
'Religion in Flames' is the second track name. It has drums more thrashy and a vocal not so closed, but you can feel all the energy that exists within the band's soul and it certainly makes the album even more insane. One great madness from the beginning to its end. One that will make you want to listen it again.
A song that can translate what it is to have the atmosphere of the woods would be 'Warrior'. A track that is madly made.
The quality of the instruments and the way they were thought to this song caused it to be amazing. It is not only the best one on the album because there is the title track, 'Mandu', but really it's a great song which can bring the classical side of Death Metal by betting on very fast drums and drier vocals even in guttural, but all of this combining perfectly with a concern for melody that makes sense, after all, the band worries with small details and always hits the perfection.
'Eye for an Eye' is a song that can conquer many people from the extreme metal fans public side because of its on something heavier.
An extremely important point worth talking about is the quality of the vocalist, Victor Rodrigues, who can change his vocal technique to explore all that music can play out of feeling and to leave it as compatible as possible with well thought out and executed instrumental. Actually, this band shows that the national scene is not dead, will not die and is very much alive because a band with such quality like Voodoopriest goes far beyond the instrumental. As for the lyrics that carry history and a cover art that also took the concern of the band by creating decent work that will be remembered for its quality and uniqueness.
It would have no way other to end this album than with 'Mandu' which is the masterpiece of the band on this work.
This track would have to win an award for such quality and incredible atmosphere created with an instrumental that is heavy and sticky at the same time.
'Mandu' showed that the band is in a really professional level and working in the most impactful way possible.
The drums have a great pace working with the pedal intelligently played and also betting on the plates. Vocals are exploring the guttural and in a more torn way. Voodoopriest's music is always releasing their work with more and more versatility which shows its pulsating soul.