[English] Cangaço: impeccable with its solid roots on Brazilian metal 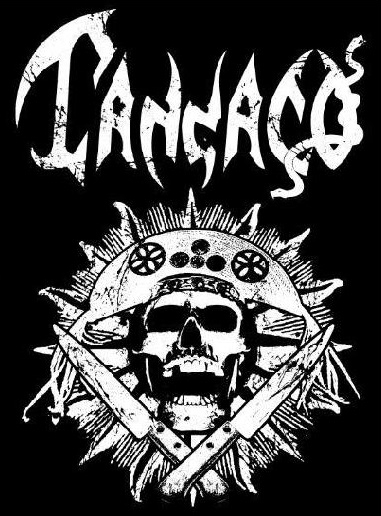 Cangaço is a unique band and when I say unique, is really unique. A brilliant sound, Cangaço is carrying one of the most rooted Brazilian metal that I had the opportunity to listen until now. Check out the band and this interview we did with them.

1. Hello, Cangaço! I would like to thank you for the interview with us from the Oroborus blog. Looking for information about the band, we find that Cangaço had Omega and then Vectrus as names since its formation 2010. Choosing a name that represents you and the sound you produce to a band is something important. What's the story behind the name ‘Cangaço’?

Cangaço: We thank you with all my heart! The name arose from the need we felt to portray the band's name which was already manifesting in the astral of our compositions and our group, it reflects on where we came from and what we are. Cangaço was and still is much more than a social and political movement, it’s entering in the spiritual spheres as something that fascinates despite the dissent about its character. That is what inspires us so much. 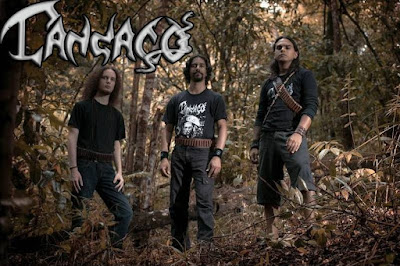 
2. The influences you guys bring to the band range from Luiz Gonzaga and Sivuca to Sepultura and Nile. How these influences permeate the sound of Cangaço?

Cangaço: Naturally. There are songs that we like to listen to whatever the label they are and we respect those who make music that is good for us. The sound it makes results of sound influences that permeated our individual and collective history. As we combine the many ingredients in order to accomplish something interesting for ourselves and for those who would identify to our music.

3. You guys are from the Northeast of Brazil, specifically in Recife - PE. Knowing that one of the greatest festivals in the region is the Festival Do Sol, what would you say about the underground scene in the region?

Cangaço: We really have some good festivals here. In addition to that one you mentioned, it is worth remembering the Abril Pro Rock (Recife), Palco do Rock (Bahia), Festival Mundo (João Pessoa), Festival de Inverno de Garanhuns and so on. All of these provide a great structure and space for new bands to show their sound. With regard to local and smaller shows, it is a little tricky because they lack of investment and there are few producers to do this. Apparently it's a national problem. Eventually, good opportunities arise, but because this situation is making more sense to members of several bands to get together and organize their own shows. Once we have available time we will arrange something.


4. Cangaço is already on the road of music since 2010, right? How to connect to the sound that you produce there with conflicts of contemporary reality and history as subjects of the lyrics?

Cangaço: As well as in the music sphere, the lyrical part unfolds in matters we deem interesting and enriching from the point of view related to the construction of social identity, when it’s needy and always overshadowed by the media mass and this intrinsic USA hypnosis, which both affect the self-knowledge of Brazil as a nation. The very choice of using Portuguese on the lyrics was a response to this need for self-awareness and reflection of our ideas on the public that identifies with our songs. 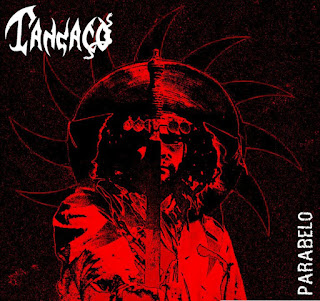 The artwork for 'Parabelo' comes from a version of the movie poster of
"Deus e o Diabo na terra do Sol"(Black God, White Devil), from 1964, directed by Glauber Rocha


5. I’ve been noticing that today many bands have chosen to release more than a demo as their first works. How is it to idealize and produce these two demos named ‘Cangaço’ and ‘Parabelo’, both released in 2010?

Cangaço: We released these two first demos in a four months interval. The release of the first exceeded our public acceptance of best expectations, culminating on a classification to represent the country at the Wacken Metal Battle 2010, which practically forced us to write something a little less amateur (all the demo ‘Cangaço’ was recorded at home, including vocals), to publicize the work at this travel opportunity (the sounding like less amateur in ‘Parabelo’ was gained by recording vocals at the studio, but still made by ourselves, since we’ve accomplished a greater mix of experience and a more presentable booklet). Before the full-length, we had released the 'Positivo' EP in 2011, which had basically the same process of recording as ‘Parabelo’, plus the excellent mixing work of Walman Filho.

6. Now, about the more recent works, Cangaço had the great full-length, ‘Rastros’, released in 2013. How was the experience of this first album for Cangaço?

Cangaço: A feeling that however work we had on it a band is only truly known when it has released a full-length album. Today, we do not we believe is true, but it was something we felt we needed at that time. We recorded then for the first time with guitar and bass plugged on amps and ‘real’ drums (previously we were composing, but using plugin tones). And we could feel it in our skin the brutal difference it projects on the sound. No matter how good the simulations were, we had proof that there are nuances and sounds that can only be extracted from analog capture, which is alesson we carry since this happened. We greatly appreciate Rico Albino, multi-instrumentalist-away-from-this-world prodigy of Recife for recording different instruments on the intro ‘Atrito’ (recording everything suddenly embodying Hermeto Pascoal) and Ivo Lage, drummer and percussionist who conceived us arrangements of percussion on the songs, with such a great taste and unique abilities. We were very pleased with the result of the capture of Desalma staff (Renato and Mathias), which have excellent equipment for this job, and again we could count with mixing and editing from Walman Filho.

7. You were the finalists of W:O:A Battle Brazil and went to Germany to play at Wacken Open Air, which must have been something really insane. How was to lead Cangaço and all its sonic identity firmly rooted in Brazil to a huge European audience?

Cangaço: A great, great experiment; an organizing model and what is to be from the underground metal to total mainstream. Until then we had that idea that our product was exclusively for export, so we were used to write songs in English. When we were there we ended up noting the immense respect from the gringos who didn’t even understood a thing what the theme of the band was and what was behind the word Cangaço. We got there quite inexperienced and even unaware of how important it is for an artist to value their roots so is going to be valued by different roots. We decided to come back to Brazil, totally soaked into the development of proposal to an authentic Brazilian sound. That being the more interesting of our export products. 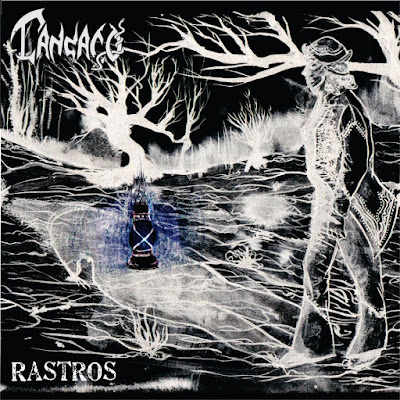 First full-length,'Rastros'. As incrible as its artwork by Alexandra Jarocki.


8. How to describe the sound of Cangaço for someone who has not listened to it yet?

Cangaço: If you can hear, hear the sound. If you can read, read the lyrics. If you liked,  find why, if not also find why not.

9. What are the two words to tell the evolution of Cangaço from the first demo to the EP 'Retalhado', also released in 2015?

10. Thus, as MorrigaM we are also interviewing by Oroborus, you are part of this amazing idea that's Levante do Metal Nativo, alongside other bands from SP, DF and RJ. How is this event for Cangaço?

Cangaço: It's been great! A good opportunity to make new friends, share knowledge and join forces in the disclosure to the work of us all. It was a pleasant surprise to know these bands, to accomplish that we have a lot in common when it comes to artistic proposal, way of looking at art and music of our country. We are all very committed to take this forward and increasingly able to take our culture to another level in National and worldwide metal. 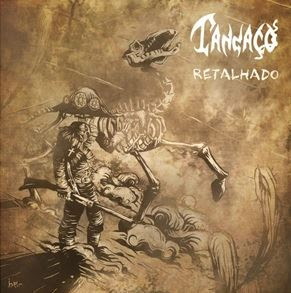 Cangaço: We will continue promoting the EP ‘Retalhado’ while working in parallel in the studio on a new album. We already have some ideas and we are quite pleased. Soon we will test some new songs live.

12. What are the plans for Cangaço in the near future?

Cangaço: Release the next album is the highest priority. After its release, we will be alert to opportunities. Now we have a few invitations for concerts in some cities, but nothing has been confirmed yet.

13. And to end this interview, I would like to thank you for your time and to wish all the success to Cangaço! The final space is free for you, Cangaço!

Cangaço: We thank you with our whole heartedly feelings for this given space, for the questions and for the opportunity to express some of our reflections. Gratitude for the existence of Oroborus and for all the specialized press on dissemination of works from authorial bands. They are as important as the bands and public in the strength of the metal scene. Good luck and success!