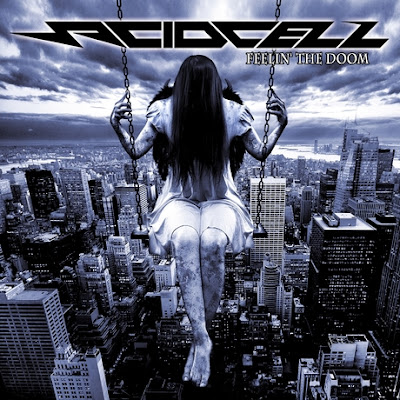 
The dark side of metal hides bands of excellent quality. One of them which is the magnificent Acidcell is able to bring your music with a sound of destruction and irony, but with technique and quality.
One of the band’s main points is their individual quality. A band which owns a voice that combines its excellent form of guttural with the low bass. Besides, the impact of the drums which know how to work with such well-done double pedal. Also, the guitar appears bringing sensational weight to the songs and still opens a space for the keyboard to be worked very well. All of this leaves no time for this band’s industrial side die.
On the work entitled ‘Feelin’ The Doom’ the band broke with all existent barriers by making an album that is excellent even on its cover art. With such a very well designed thing, they bet in blue tones, also black and white which together gave it a darker atmospheric side of the band and right away. We face the opening song, ‘Do I Look Like A Slut’, and its violence and excellent technique. With this, they found a way of showing that Industrial Metal is not just made of Rammstein. They show us that this metal genre has its power too.
‘Do I Look Like A Slut’ is a perfect junction of an apocalypse’s chaotic dance of with some kind of revolution of the industry, causing panic and disease in the human race, while taking all the money of the world which will certainly bring an endless war. Of course, all this is a great sight of mine about the music, but focusing on the song, it’s excellent. The fast pace and the vocals can merge moments of different vocal techniques, even through breast vocals or with the guttural. This song has such a great voice even when it’s acute as if it were the voice of a demon, an excellent song that starts the album in the best possible way.
The second song entitled ‘Beautiful Undead’ is a song that is strongly reminiscent of Marilyn Manson, but with a touch of uniqueness.
The band has an Industrial Metal side that makes it even more formidable on this track. A great song like that can represent and well illustrate what is this band’s way of build their identity. They managed to do such an awesome sequence of high-level music production that their final work is always unique.
Alike all the Gothic and Industrial Metal albums around the world, it must have a ballad and on this Acidcell’s it is ‘One of Us’. This track has little something to do with Moonspell’s similarities, but vocals are always bringing it in a way that can perfectly win the soul of the listener.
This is perhaps one out of this world power from this band beyond the individual highlight, because they know when to make a ballad and where to put it on the album. Also because this band rescues the passion inside of its work and by this they can show that the band has a side that will still be there for you to explore it. All of that brings a bit of some macabre poetry Moonspell does on their works, even though I’m not comparing them, but with lyrical theme that somehow resembles this detail is fundamental to this song.
The song that closes the album, named ‘Children of The Night’, arrives with your angry while presenting one side of pure density and adrenaline. A song like that can somehow build the Industrial side on your mind and also bring the singer’s pain and despair until all lights of EBM ballads capture your eyes.