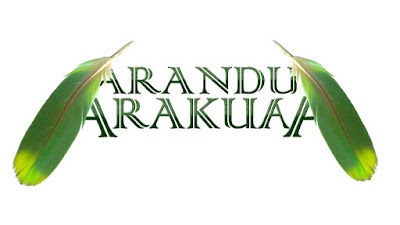 Arandu Arakuaa is a band that I met recently and I soon found their work very sensational. The band brings a unique sound, an indigenous music which merges with metal, as well as its mission to draw people's attention back to nature and to the struggles of indigenous people in Brazil. Please check this interview with this great band!
1. Hello, Arandu Arakuaa! Thank you so much, on behalf of Oroborus blog for this interview opportunity with you. First of all, the name of the band is impressive even when we read it, but what would be the meaning of Arandu Arakuaa? And, a personal question, what is the correct pronunciation?

2. To connect with the incredible sound of Arandu Arakuaa, the central theme of the lyrics - indigenous tribes of Brazil and their tales, especially Xerente and Xavante tribes - makes it even more amazing. If we consider that they are sung in Old Tupi language, it makes us really amazed. Why did you choose this lyrical theme even more "truthful" in Tupi?

Zândhio: The Xavante, Krahô and Karajá cultures, among other Indigenous people from Cerrado, especially Xerente are part of my formation, given that I was born and lived until 24 years old near the Xerente tribe in Tocantins. Arandu Arakuaa is a project result of a natural process and also an old dream of mine about calling people's attention to the culture and the struggle of Indigenous people from Brazil, once they are suffering genocide since 1500.
On the first album, 'Ko Yby Oré', we decided to compose only in Tupi for Brazilians have some reference about the language. On the second album 'Wdê Nnãkrda', it's also composed in Xerente, Xavante and a song in Portuguese. The diversity of indigenous languages on our work ​​seeks to draw attention on preserving the resources that we still have and among them, the languages ​​that still resist and which need to be preserved.
In our lyrics and videos, we also seek to call for the importance of urgently reconnection with Mother Earth, rather than continue on destroying it. 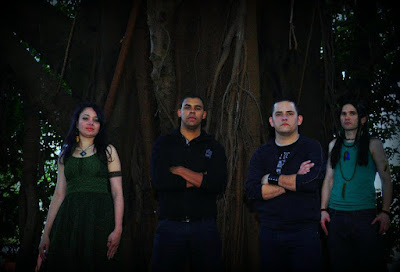 3. The band currently has four members, right? How was the process of forming the band back then in 2008? And in terms of musical influences, which sound references each of you bring to Arandu Arakuaa?

Zândhio: I came to live in the Distrito Federal (DF) to form the band, but rather played on other projects between 2008 and 2010. Many musicians were tested for Arandu Arakuaa. When I met Nájila (vocals) and Adriano (drums) over the Internet between October 2010 and January 2011. Once Adriano joined the band, he called Saul, these two have played together in other projects.In terms of influences, I had clear direction to mix heavy metal with Indigenous Music, Brazilian Traditional Music and Indigenous Thematic. My colleagues came from different schools and brought other influences among them: Nájila - Death Metal; Adriano - Brazilian Rhythms and New Metal; Saul - Progressive Rock of the 70s and 80s. Today we continue to add new influences and this motivates us to become better musicians.

4. The first work of the band was the EP 'Arandu Arakuaa'. How was to produce this EP and released it in 2012?

Zândhio: It was our first recorded work. We produced it hastly and with few resources. The intention was to introduce the band and to our surprise it had a great acceptance of critics and public, paving the way for the album 'Ko Yby Oré', recorded in 2013. 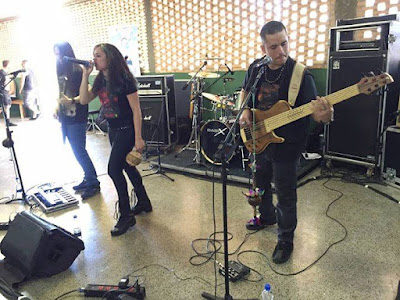 
5. Looking for information of the band, we find your projects in schools. Tell us a little about this initiative with Arandu Arakuaa.

Zândhio: We have our cultural and educational veil very latent. It is natural for people to use our music and request our collaboration in school and academic works, this makes us very glad. Myself, from a personal point of view, because I am an educator  graduated in Pedagogy. For some curiosity on each Arandu Arakuaa's album is a children's music: 'Îakaré 'Y-pe' (River of alligators in Tupi) on 'Ko Yby Oré' and 'Dasihâ Zumze' (whcih means 'playing' in the Akwe Xerente language) on 'Wdê Nnãkrda' album.

6. The second work of Arandu Arakuaa was the full-length 'Ko Yby Oré', released in 2013, which highlights in my opinion are the songs 'Aruanãs', 'Tykyra' and 'Gûyrá' as so spectacular ones. As record it and release it?

Zândhio: It was an amazing experience. We were able to materialize our music and working with producer Caio Duarte, he's a great professional, musician and human being. The whole process was a great learning experience and the results far surpassed our expectations. We are self-taught musicians from the periphery of the city and with plenty of time to fight for the underground metal scene, so having a well-written and well-produced  album is an immeasurable achievement.Before the album's release, we released the music video of 'Gûyrá' and many people liked. From this day on it continues to thrill many people and this people gave and still give us great confidence.Another curiosity is that 'Aruanãs' was composed in 2003 and all projects for which I've shown this song  rejected it, then know that people like this song excites me so much. 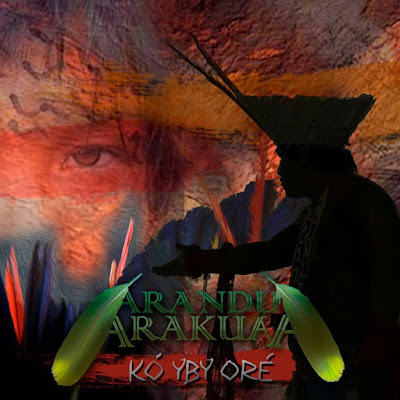 Bringing its sensational theme even on the cover art for 'Kó Yby Oré'.


7. You are Wansbeck, DF, right? How would you describe the local underground metal scene?
Zândhio: Distrito Federal in general has always been known for revealing great metal bands and of course all those rock bands like Legião Urbana, Raimundos... Here in Taguatinga we have, for example, Violator which is a worldwide known band.
Of course we have the same problems of all independent bands such as lack of  show houses and infrastructure.
8. Arandu Arakuaa was one of the sensational bands to participate on the 2015 edition of the folk metal in São Paulo, Thorhammerfest. How was that experience for you? Was it the first time here in São Paulo?
Zândhio: Our first time in Sampa. It was a fantastic experience, the audience was insane! They informed us that we were the only band who people asked bis, even having a seminal European folk metal band closing the event. In this show we also had the happiness to record a scene for some series about the legendary Zé do Caixão that is being broadcast on TV Space. The actor Matheus Nachtergaele (the eternal João Grilo from the awesome Brazilian movie 'O Auto da Compadecida') went up the stage during our presentation interpreting him was exciting. 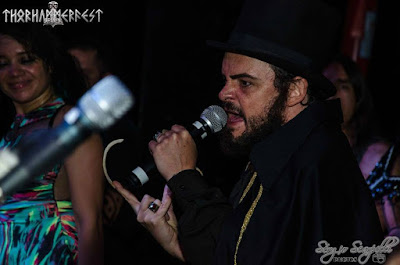 The actor Matheus Nachtergaele interpreting Zé do Caixão at Thorhammerfest on SP.
Photo by Sergio Scarpelli.

9. The most recent work, 'Wdê Nnãkrda', was released in October of 2015. How was writing and recording such a masterpiece?
Zândhio: I think that on this record we explored very well all the elements already shown in 'Ko Yby Oré' (This Land is Ours in Tupi language), we consider that in 'Wdê Nnãkrda' (Tree Trunk in the language Akwe Xerente) have a mature band. The writing and recording processes were well thought, also very organic and fun. We focused even more on climates and indigenous melodies, the harmonies of traditional Brazilian music and heavy metal parts sothe sound gets heavier an heavier. On this record, we made sure to continue working with Caio Duarte. To be honest I do not think we would get this result with another producer. With Caiowe're always tuned and his ethics are things that just work very well.
So far, we've only received great reviews and audience, then we are very happy and excited about the return. 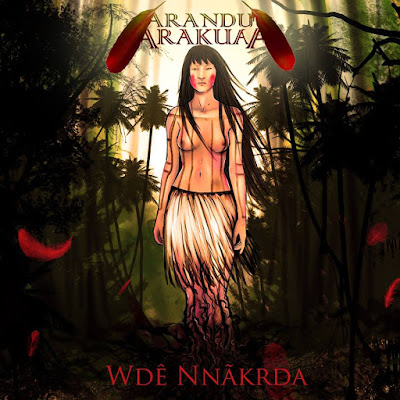 The cover art of 'Wdê Nnãkrda' seems to invite everyone to listen to the album
just by this indigenous teen's expression.

10. As Cangaço and Morrigan band which Oroborus is also interviewing, you are part of the 'Get Metal Native'. How was it to be part of this movement?
Zândhio: It is a project for which we have great affection, it was meant to spread our native culture and history and thus inspire new people to also give their contribution. In fact, each band was doing it individually, but together we are stronger.
Bands that are part of 'Levante do Metal Nativo' are ACLLA, Arandu Arakuaa, Armahda, Cangaço, Hate Embrace, MorrigaM, Tamuya Thrash Tribe and Voodoopriest.

11. The unique identity of Arandu Arakuaa consolidates further with your clips made in the midst of nature, whether near forests or waterfalls. How was recording the latest clip for 'Hêwaka Waktu'?
Zândhio: The lyrics of Arandu Arakuaa are made in the aesthetics of Indian music, few words, but bearing strong messages or telling stories that are complemented by the ambience of the music and visuals. We want to write in nature just to call the interest of people on reconnecting with the great Mother Earth.
On the case of the clip 'Hêwaká Waktu' (Black Cloud in the language Akwe Xerente) we knew it would be the single even before the disc burning due to the peculiarity that it was composed. The lyrics came when I went to visit some Xerente friends in Tocantins in late 2013 and at the time it rained enough in the village. The music was composed during carnival of 2014 in a region near Pantanal in Mato Grosso do Sul and there also rained while the whole process of recording 'Wdê Nnãkrda' went on. Another curiosity is that part of the video was recorded in Bananal village (Sanctuary of the Shamans) - DF on 04.19.2015 (Day of Indigenous People) in a ritual homage to one year after the death of their leader shaman, Santxiê Tapuya.

12. How is the agenda of Arandu Arakuaa for this end of 2015? What about the near future, what plans?
Zândhio: On December 5, we will be in Guava Rock Festival, Inhumas - GO, Brazil. We had a few shows in 2015 because we focused more on recording, release and dissemination of 'Wdê Nnãkrda'.
In 2016, the plans are to play live, especially at festivals, try to make a mini tour, disseminate 'Wdê Nnãkrda' and 'Levante do Metal Nativo' and to start writing for the third album.

13. To end our conversation, I would like to thank you again on behalf of blog and wish success to each of you and to the Arandu Arakuaa. The final space is yours!

Zândhio: We greatly appreciate the space, it was happy to answer questions so well prepared.
We would also like to thank all the people who support us. Stay tuned to our official page and channels, there you will have enough information about our activities.