[English] Perventor: The destruction of the Colombian Black Metal 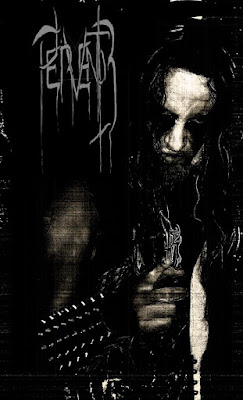 Caterine 1: Hi, Noire Perventor! Thanks for doing this interview with G.Grind blog. First, I wonder what is Perventor’s name about?

Noire: Hello, first thanks to you for the support, and answering you, the name born like an acronym of ‘’Perversion and Torment’’ but it also means ‘’Arrive’’ in Latin.

Caterine 2: Why did you choose to make Perventor a one-man band?

Noire: I started with the idea in 2005-6 it was a project that I always tried to inject energy as a Black Metal band while I was playing with my friends of all my youth, we even learned to play instruments together(hehe), in that time they seems like to play Heavy and Thrash Metal, I barely found people with respect for the black arts and the necro sound, i was already possessed by Black Metal so…I just followed some influences, and started to record.

Caterine 3: Since Perventor is a one-man band, what would be your musical influences? If you could play in a band you enjoy too much, what would be this one?

Noire: well, Xasthur its a big influence to me, Tsjuder, Horna and Bathory, Old Emperor, Old Gorgoroth, Drowning the Light, Nargaroth, actually I never though in playing in any band over there…

Caterine 4: Your lyrical themes are purely extreme ones. Metallum says they’re antichristianism, hate, misanthropy, war and lust. Why did you choose these ones for Perventor?


Noire: I guess, cuz I have nothing good and positive to express through it.
I hate everything about Christianity, and War it’s a reality that has been and will be consuming humanity till the end of the days, and about misanthropy and lust, isn’t hard to understand me in that way right? .

Caterine 5: Black metal is a subgenre appreciate by “prepared” people, because the sound has those characteristics like the “necro sound” that not so many people enjoy so much. How to describe your music to people?

Noire: Like you did, necro and raw, strident with hidden messages in the guitar riffs, and made totally against the wing.

Caterine 6: I’ve listened to Perventor’s ‘Demo I’, ‘Demo II’, respectively released in 2010 and 2012. What was to write, compose and produce such amazing songs like those demos via independent?

Noire: im surprised you’ve listened Demo I (haha), I never though on it before but now I do, its hard to explain it was a very rare and long process, good and bad things happened and at least to me some are reflected in those Demos in some way.

Caterine 7: Your latest work was ‘Demo III’, released in 2014, is a great work though. What would be a word to describe the whole process of composing that masterpiece?

Noire: Thank you for the masterpiece thing and it would be, ‘’Reborn’’. 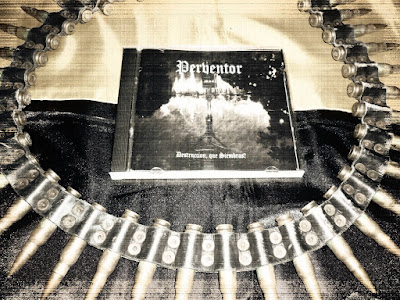 Caterine 8: And about the recent EP named ‘Destruccion, que siembras?’ and released in this year. Are you planning on upcoming albums?

Noire: Oh, hell yeah! The next charge of hatred will be released starting 2016

Caterine 9: How would you describe the evolution of Perventor’s songs since the start in 2008 to today?

Noire: Like a road with obstacles that I beat with the time, that let me a lot of memories and teachings.

Caterine 10: Do you think about Perventor performing live concerts one day?


Noire: Not sure, maybe one long and distance day, if I still alive and got health, when I started recording alone the samples for Demo I, I wasn’t interested in the exhibition of Perventor as a band for concerts, I was invited once in my city recently…mmm last year, I don’t know why I didn’t say no, maybe cuz I used to have some appreciation to the person who invited me, but welI…i just comment to my friends from my other band and we just played our recently recorded songs (hahah), people didn’t care anyway, was a nice night.

Caterine 11: When we searched we found on your Youtube channel and Metallum that you also play in a band called Ritos de Muerte, which is not a one-man band. What’s the experience of working on these different “types” of band’s configuration?

Noire: In Ritos de Muerte I found what I was looking for Perventor years before…a good drummer, my city Barrancabermeja its small and there just a few drummers good ones too but focused in their bands and like I said before with a short or none interest in Black Metal, I meet Ritos de Muerte drummer, he likes to be called ‘’Misht’’ in Bucaramanga, a bigger city at 2 hours and half from my home, we share instantly, the insanity and the hatred for the christianism, and of course, we started to play together, didn’t take too much time for us to add another close friends ‘’Asmodeo’’ (2nd Guitar) and ‘’Rising Fire’’ (Bass) but they desecrated with us only 1 year, nowdays Ritos de Muerte line up in studio are just Misth and me, for stage live performances we made alliances with two brother-hordes from the other side of the country (Pasto, Nariño) with AlastorGoat in 2nd Guitar from War Metal Band, S.T. and Leviathan from Pagan Blood and Ancestral Mor.

Caterine 12: How would you describe the underground metal scene at your current city Barrancabermeja, Colombia?

Caterine 13: And to end our conversation, we’re thankful for your time and consideration on answering us from G.Grind blog. This final space is for you to say anything you want to.

Noire: Well, I want to thank you and G.Grind Blog maniacs for the support, keep supporting underground metal scene, and stand up proud against the fucked up Judeo-Christianism!