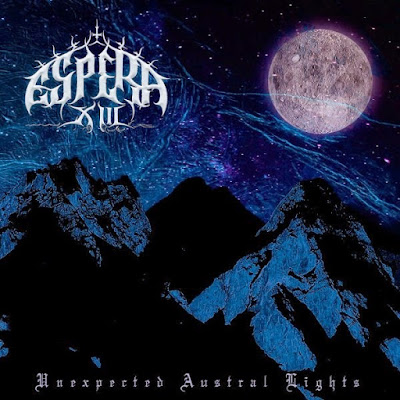 
The first review of the blog was really hard to choose, but it is worth starting with a band that Brazil has to be pride and this band would be Espera XIII from Sao Paulo.

A powerful band that does not leave at any time lack of anything in their sound and if you want some good music, talented musicians and creativity in music, you must listen to them, because their music  can put it all this together and little more.

Espera XIII was formed in 2010 and has 5 releases until now. Being 2 demos, 1 single, an EP and an album, but today we will talk about their last album, the impeccable ‘Unexpected Austral Lights’.

Unexpected Austral Lights is a truly excellent work of the band and every band to do a job well done like this has to have an artwork well done. So this band knows what it is to work as best as possible, the art of their work is something very simple, but this simple side provides the perfect atmosphere and the dark of night with the beauty of the moon.

The first track on the album is the self-titled ‘Unexpected Austral Lights’. A track that starts with the whole atmosphere and quality of then Melodic Black Metal produced by the band. The guitar has full power in music and it brings a speed and thrilling melody, yet very beautiful. And you can stick in your mind that the drums can bring the speed also impeccably. There is no way better than to begin an album with such song, because the band bets in moments of melody that vaguely resembles Carach Angren, the legendary Dutch band of Symphonic Black Metal.

Power, speed and quality are things not lacking in Espera XIII’s music. On the second track, titled ‘Alliance’, the band makes clear that the album will not let die at any time the quality and characteristic of Melodic Black Metal.

In an interesting and very professional way, the band can put on a chest voice in junction with some harsh vocals that appears impeccably and beautifully crafted. It does not leave at any time some lacking melody or the beautiful and dark side of night which meant when they play their Melodic Black.

The Death Metal appears slightly on the album, but was this little detail that made Espera XII so different. The double pedal works extremely quickly. This album is a catapult of euphoria and feeling that makes the listener want to go to war and feel the ocean can really offer to humans. Espera XIII is not only representing Brazil in the best way, but is also bringing the Melodic Black Metal to the world in beautiful and extremely unique ways. To say congratulations would be so little to say to the great work of this band.

Once they’re placing the double bass in this story it would have no way not to mention the track ‘Leviathan’ which is really an endless machine gun and that can be a major point of this range. It would have no way not to mention it either to the next one, ‘The Great Dark Spot’  because it features more death metal sided that can really show both genders. That’s amazing, because the band does not leave at any time a lack of quality and can leave the Melodic still alive as the Black though, but without hiding the Death Metal between the other subgenres listed before.  Such a great job!

When you create an extreme album, usually one of the songs has to be different or lighter to be able to draw people’s attention to where the extension of their work can travel to and it’s complete on ‘Unexpected Austral Light’ album by the message Espera XIII wanted to share with the track ‘Dehydration’, one of the most beautiful tracks, maybe the most beautiful one.

‘Dehydration’ is formidable, it can bring the atmosphere from the damned souls of a ship who lived its days of glory and now is sinking, but with pride. It seems like this because they know that the dark ocean floor will be born again with the power of the Flying Dutchman which has its legendary Davy Jones.
This band is really something incredible and there was no better way to start our works on this Oroborus blog.