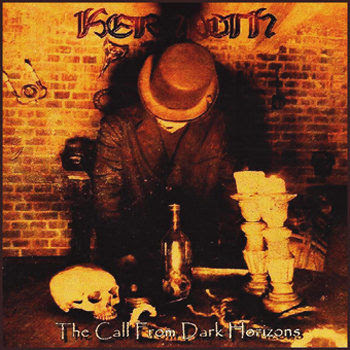 
The underground hides many wonders, incredible quality bands that make you want to listen over and over. One of the bands that manages to present impeccable quality within the Black Metal world is Kernaoth.

This amazing band was born in France and can carry the flag of the country in the best possible way and with just two works, the band makes clear its value and power.

“The Call from Dark Horizons” is a true masterpiece of the band, an album that manages to bring the classic sound of Melodic Black Metal and more rustic features of Black Metal and right away on the track entitled "Nakti Khor" the band has shown more rustic side of Black Metal, but with a way to compose with excellence that can leave the living melody in all times.

The song has a bass that is alive all the time, a bass that can bring the night to the music and night music becomes even more interesting by the atmosphere it creates. The guitar does not leave at any time lacking energy and vocal, which is a great quality, with his harsh vocals, makes it even more amazing.

“I Am Your Hunter” is the second song on the album and it has a beginning extremely pulling the Melodic Black Metal, but the vocal shows itself more highlighted, able to show a side of rustic Demos Black Ancient Metal, but has great quality. The drums appear to bring a very interesting versatility. Working with a dual pedal most of the time and it does not get quickly to the extreme to even resemble the Death Metal, but it is fast enough to create an atmosphere of impeccable destruction and making music become even better.

This album really knows how to do a unique job and very nice while it can be destructive.
It’s not for all the band out there being this able to make an album start so complete like this, since the third song is different and very genius. "The Day I Born" you get from your guitar melody that it can be totally enjoyable even if you have an open vocal of a very necro harsh. The drums appear working fine to get it much alive with those plates in music and in this range an instrument gains too much power. The keyboard appears bringing an atmosphere even more obscure and magnificent. “The Day I Born” is one of the best, if not the one best song of the album, because on this track their quality is destructive.

The quality of the album does not stay low at any time, and this time the song "Monster Show" appears. This is one that you can explore more and more because of the keyboard and its intro that can change the mood of the music and make the atmosphere a little bizarre, but with high quality and sarcasm in such quality and intensity.

Kernaoth was able to show in this one album their quality, creativity and feeling for the music they were creating. Actually, we can call it the band of the Night Entity.