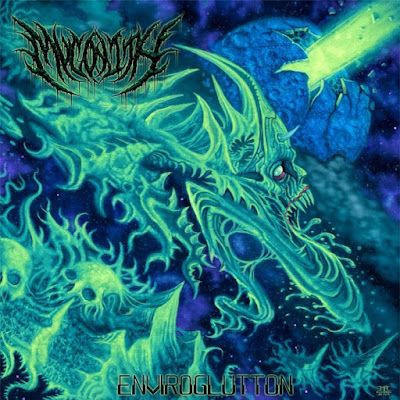 
The destroyer metal genre of all times, Brutal Death Metal presents to the fans this band called Myconith, this devastating band of the United States.

For some people, the band also takes a bit of Slamming Brutal Death Metal, but it being Slamming or pure Brutal Death, the band knows how to do it and they do in such a destructive way.

Their EP entitled ‘Enviroglutton’ came out in 2015 and right away it shows that their work has to be valued, because it carries a potent fury and a very low tone recording.

The first track entitled ‘Sporification’ already shows clearly what the band wants to transmit in a matter of density and brutality. The sound presented is something really serious, but somehow manages to leave alive the sound of the guitar, bass and the vocals can create an atmosphere very interesting with an extremely closed sounding at some points and at times they keep working with a little torn guttural.

Starting at this great with this EP, the band could not fail when following this weight line with the other songs. The second track titled ‘Scrab Swarm’ appears also bringing an extremely dense sound with a double pedal worked pretty well. Unfortunately, the pedal sound was taken with a little low tone, but there is no problem because the band can still be destructive and it shows with the guitar and the random sounds of shots that they really made an atmosphere of war.

‘Scrab Swarm’ features a dry and direct guttural that can be extremely compatible with the drums when it doesn’t leave at any time missing brutality and anger, a track that can proceed to the next song very well.

Cutting out the question of the tracks, it’s always good to remember that the cover art is really something great and it always presents the album in a specific way and depending on the cover art, you can already earn some fans. This EP’s artwork is really well made, a shade of green working perfectly with the background that makes the emphasis on the more bluish side. It’s really an art that can be worthy for the whole EP because this art that can be somehow printed in your mind and this way to always bring the brutality of the album which can be dense in the extreme.

‘Decrepitude Abhorrent’ is the song which appears right away exploring the double pedal and the bass as well. The bass brings a very charged atmosphere and the music starts to gain more weight, more anger and more anger and more chaos, a band that actually brings the Brutal Death Metal.

To the end, the song called ‘Enviroglutton’ appears. It’s a song which is the title trackand everyone always put their hopes up high for the title track. This one transmits the sound of a thunder that comes from hell, actually a song that can end this very well work. This band has everything to surprise the fans on their next work.