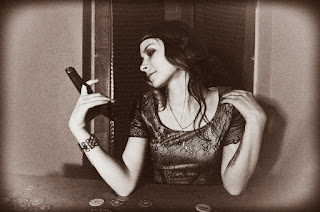 Russia always comes out with good bands, but there is a point that can change everything in the scene of this heavy, brutal and destructive death metal band named Dehydrated.

The quality of the band is something really amazing, great music, the weight is fully compatible with Death Metal, the individual quality of each member makes the band achieve an even more interesting level within the genre, but the destructive machine of souls, the creature eating planets really is the lead singer Irina Sidenko which has a technical and a really distinctive voice.

Many bands have started to invest in women for the vocals, and Irina Sidenko is one that can break all the chains, her guttural is really destructive managed to put some men to lick her floor by her power and technique. But one singer can not only have a powerful voice, so Sidenko is a really complete vocalist, a great stage presence, a very beautiful woman and a very destructive one.

Dehydrated has one demo, two albums, one split, one EP and one single, all of them have excellent quality and great taste and leaving always a highlight for the album ‘Zone Beneath the Skin’, an album that has no fairness. It’s a violent work that has excellent melodies and vocal as incredible as. ‘Zone Beneath the Skin’ came via HeadXplode Records in 2012 and so far can be considered the masterpiece of this band that has everything to grow further and showing that the strength of a singer can never be underestimated. 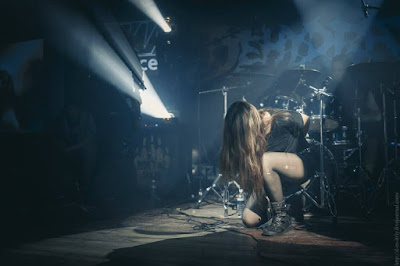 From this band you can expect a beautifully produced work, drums that has the speed needed to make music something not tiring and can bring extreme weight also, a guitar that appears every moment bringing an electrifying sound and a bass that is not hidden at any time, really a full band and that can carry the banner of Russia as best as possible.

At live gigs the band can have class and be a killer too. Irina can be sensuously evil with her screams and her stage presence. Dehydrated songs can also gain more weight with pig squeal done on a few songs, an excellent example is one of the best songs of the band ‘NE (of the) W’. That's a reflection of the end of the world and can show all the best from each one of the band members.