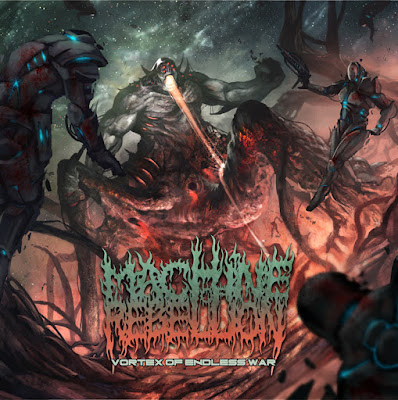 Indonesia, the country which I have a great love and indeed this country has a ridiculous great amount of awesome bands of Brutal Death Metal and Machine Of Rebellion is one of them.

Machine Of Rebellion is a band that is kind of unknown in the world which I hope for a little while, because this band knows how to work and it brings its first release in 2015: ‘Vortex of Endless War’.

In its first release, the band manages to bring this album ‘Vortex of Endless War’ by the label of Brutal Mind which also works with bands like Cannabies, Perverted Dexterity, Omnivorous and many others.

‘Vortex of Endless War’ begins with the track ‘Prelude to Apocalypse [Intro]’ that has an impeccable atmosphere which can really bring a sense of destruction, a real apocalyptic sense. This was the right choice of song to introduce this flawless album.

The second track entitled ‘Vortex of Endless War’ that carries the album title, already shows the strength the band has in its instrumental right away with the drums that work extremely quickly and with double pedal which is well explored to always to a great sound. The music has an impeccable vocal strength in a more open way even in guttural because those growls are always used in the best possible way. This song has bass lines that can leave the music so dense which shows that the band’s work is only getting better

‘Thoughts of Forgiveness’ is the third track. It’s a track that does not let you rest and starts with the weight and destruction. It’s a song that can make all the sense of chaos appear and it makes everything with an atmosphere even more interesting. The weight of this band it is something really worthy of a great country such as Indonesia. The bass is working as best as possible, guitars appearing at the right time and lacking never and nothing, the guttural appears bringing its own fury. All of this I said before are such great jobs on this album.

The Brutal Death Metal of this country is always very well done and always very destructive. The guttural is extremely closed when it has to be and it appears bringing an extremely closed sound. The guitars appear making a quick and yelling solo which can leave everything even better and more enjoyable to listen to.

The bass, which is an instrument so wronged and forgotten by so many bands, in Machine of Rebellion, it always appears brilliantly on its Slamming Brutal Death Metal and Brutal Death Metal with such power that almost makes takes the front of the band and shows how to destroy the world with its own apocalypse.

‘Ode Untuk Kehampaan’ also features right away he band’s anger and more than that, it also presents the individual quality of each musician. A guitarist who can create as simply and perfectly as it is and still matches all the works on the band beyond awesome. Drums appears on this track working again with the dry side of the Blast Beat, but somehow it is still fast. The guttural on this song can bring its unique power in conjuncture to the bass that can bring to the song the very weight of the apocalypse. It’s a really incredible song!And to end it, a very important message, if you have a band and are afraid of being judged by the cover art of your album, you can do it quite simple and still have a well-done cover perfectly done alike to Machine of Rebellion.