[English] Scalblood: hate on the melodic death metal from Russia

Scalblood is a Russian and magnificent band. They've just released their first full-length album and it is already a destructive and purely well-done work. Check out this awesome band and this conversation we had with them!

I. Hi, Scalblood! I’m so very thankful for this opportunity of interviewing you guys. First, where did this name come from?

Loki: Hi, Caterine, and also hello anyone reading this! The name, like a good number of other bands' names, is just a bunch of nonsense which was suggested by our friend, Aleksandr Fedchenko (who is also our recording engineer and owns a studio in which we recorded our album). We like how it sounds though. We used to call ourselves 'Oddworld', but changed it because it was really hard to pronounce for non-English speaking people.


II. Who designed this logo perfectly according to the sound proposal of Scalblood?

Loki: It's also one of our friends, Sergey 'Sergie Mercury' Afanasiev, Krasnoyarsk-born singer, composer and designer, who now lives in St. Petersburg.


III. You guys describe Scalblood’s metal as melodeath with a touch of black metal. I’ve listened to it and it’s amazing, actually beyond amazing. Do you consider your songs a new subgenre of metal?

Loki: It of course would be flattering to be told of like of a founders of a new subgenre of metal, however, we don't really think that way. I would say it's generally a melodic death, but we try and incorporate other subgenres as well, like thrash and groove metal and anything we feel appropriate for a song at the moment. We do not limit ourselves in that, so you may hear some sympho, folk or even industrial parts from us in the future, who knows :)


IV. Metallum says that your lyrical themes are philosophy, life and some abstract ones. Why did you guys choose those for Scalblood?

Verz: It's mostly abstract themes - fears, dreams, mysticism - than general life themes. We choose it because the majority of metal bands sings about how is bad, that everywhere there is inequality and other stuff. Just everyday themes and thoughts. But what a man feels left alone with his fear or ancient evil, about this not much is usually said, but in my opinion it is a matter of great interest.


V. Scalblood is a band with five members. What are the influences of music each of you bring to the band?

Verz: I think first of all it is Children of Bodom and their vision of melodic death metal, then of course early era In Flames, and many other influences like Testament, Soulfly, Dimmu Borgir, Pantera...

Loki: I could also name Carcass and Cradle of Filth, certainly influenced a couple of songs. Also Arch Enemy, Dark Tranquillity and the whole Scandinavian death metal in general. 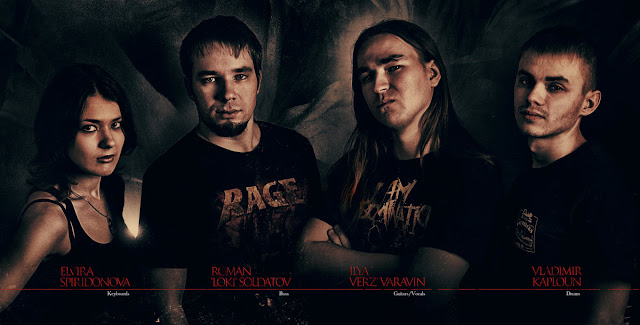 VI. How Scalblood would describe the underground metal from Krasnoyarsk, Russia?

Loki: I think that our scene has almost everything now - decent musicians, interesting bands, nice venues (could be better and also more of them, but we're pretty happy with what we have now). The only thing lacking is the connection to the rest of the world. Enormous distances in our country and ongoing financial crisis play the biggest part in it. Most of Siberian bands only tour in Siberia, the luckiest of them also in European part of Russia - and that's still a hell of a trip. And most of them are practically unknown outside their region. Sure, the Internet helps a lot in this, but it's still a long way to go.


VII. Your first work was “Психология душевнобольных” under the name of Oddworld, which was the first name of Scalblood. How was to produce this first work?

Loki: It was one of our very first serious recording attempts, but thankfully Artem Ponyavin was there for us to handle all the recording and mixing stuff. Everything on the EP, except drums and vocals, was recorded at his home. I don't think we've spent much time on that, because by the time of recording we've already played that songs for a while and knew what should be and how it should sound like and so on.

Verz: It was like: "Hey, we need to record our tracks". Loki: "I have a friend who can help us with it". Verz: "Let's do it then!". Something like that. It was completely DIY.

Loki - Yeah, recorded at friend's home, mixed and mastered by him, cover art by other friend, completely self-promoted... It was a lot of fun though.


VIII. We’ve researched and we find that you guys played at numerous venues on your region in Russia. So I wonder, how was Scalblood’s first gig? Is it still exciting to be on a stage nowadays?

Loki: It's actually getting more and more exiting every single time so far! First gig was at a small local summer music festival. Unfortunately, I wasn't even there for the first gig due to family stuff, and had to ask another bass player to replace me for that concert. But I think the guys handled it well :)

Verz: Yeah, the first gig was pretty good I think. And yes, it is still exciting to be on stage every time, especially in other cities.

IX. About the full-length, “I”, released this year. This masterpiece is so awesome to me since the first time I listened to. The songs ‘Virus’, ‘Insomnia’ and ‘Agony’ are beyond excellent to me. How was to compose, record and produce “I”?

Loki - Thanks, we appreciate that! Making that record happen sure wasn't quick and easy.

Verz - Hard work, no sleep ) about a half of the songs, including "Virus" or "The Temple", I composed in a few years, while we still had problems with line-up. So actually we started recording of the album during the process of inventing the rest, adding details to the lyrics, to some keyboard parts. For example, the lyrics to "Insomnia" - it was two sleepless nights for me. 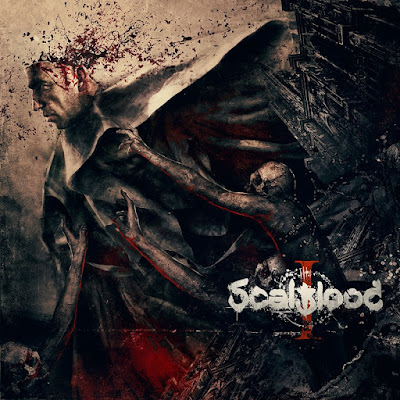 Their beyond awesome first full-length album, " I ", is already a killer since its cover art.

X. Since we’ve talked about Scalblood’s album and EP, I have a question: why did you choose to sing in English only for “I”?

Loki - We decided to switch to English to be understood by the majority of the metalheads all over the world. However, we'll always be doing a Russian versions of songs here and there occasionally, maybe even full versions of albums in Russian, just because it's cool and interesting too.
Verz: We had both versions for almost every song, English and Russian, but finally chose to record in English.


XI. That you guys are really talented is something I saw on “I”, but Scalblood is even awesome. You guys opened to Rotting Christ back then! How was it to Scalblood?

Loki - I would say it was our biggest moment so far, even that the crowd was not really big and supportive. The guys from Rotting Christ was very nice, hanging out with us, signing stuff for us and our friends, and also they put a really great show that night. Would love to open for them again any day.


XII. What would be the three words to describe Scalblood’s music to someone who didn’t listen to your songs before?


XIII. How is Scalblood’s agenda for this 2015 ending? And what about the plans for near future?

Loki - We've got most of the material for a new album ready, half of the songs we've already played at our recent shows. We will go on a small Siberian tour in March, and then, I think, we'll start the recording process.

XIV. And to end our conversation, I would like to thank you again for your time and consideration. We, from Oroborus blog, wish our very best to each of you and to Scalblood. This final space is for you to say anything you want to!

Loki - Thanks for reading this! You know, we're big fans of Sepultura and played their songs a couple of times at some local festivals, and people seem to really love that. I also admire Shadowside, Almah and a lot of Brazilian metal bands as well, and I would like to know more about Brazilian metal and metalheads. And, of course, we would like to see you at our show someday!