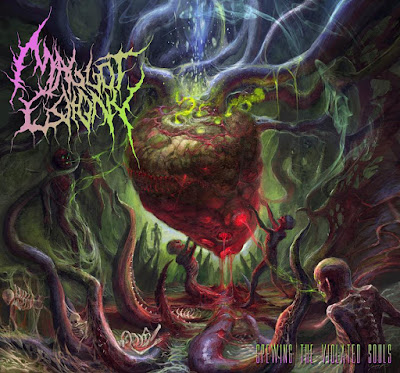 The world of the Extreme Metal is born again with this band's, Maggot Colony, work entitled 'The Violated Spewing Souls', a destructive EP full of quality in its brutality.

The band already made a career with other releases: a demo titled 'Promo 2013', a single called 'Infinite Mind Extraction', a full-length album 'Perpetuating the Viral Infestation' and the latest work is this EP which came out via Rising Nemesis Records.

Brutality doesn't lack on this work, but a very interesting point to note is their concern which started since the moment the cover art was somehow alive. A very well done artwork that knows how to work with the colors in its best possible way and always conveying some of the atmosphere that is built in every track of this work.

The EP starts with the track entitled "Sins Regurgitated On Men". It already leaves the atmosphere loaded with brutality up front with an extremely closed vocal,  totally pulled to the pig squeal style and that is amazing, surely very well done. The drums appear working fine with double pedal and the plates, once it creates an atmosphere of chaos, darkened destruction and a bit of slamming.

Working in very impactful way, the band can build a sound extremely well made and well thought-out, which is not repetitive at any time. This EP can show the individual quality of each band member. A guitarist who knows how to work in certain moments with the heaviest riff and with more energy in others.  A drummer that know how to build weight and speed, density with chaos volume and all this fits perfectly when the bass comes in music, creating a balance of a bloody ocean built up by Maggot Colony.

Beginning this way, the band couldn't let the pace get lighter and the second song, which is the selftitled one  of the EP, can present the other side of the band's brutality and presents more and more of the frontman's technique with his deep and overwhelming vocals.
To end this work, they put the track "The Crimson Swirl" which has a more measured pace, but at the same time they still manage to show their quality, technique and hatred on their music.

The singer showed his destructive form of pig squeal through the whole song and with this he would embrace all the other instruments by virtue of building such a hatred sphere somehow devouring planets.