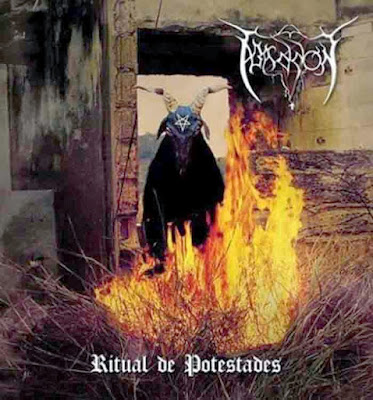 
The current way of producing an album frequently helps the bands to get a modern and well thought level of their work, but this can be somewhat tricky to Black Metal bands which want to reach the ancient atmosphere of saturated sound and do it all the more "Nattens Madrigal" possible. Fortunately, some bands still want and bring that impact at its most torn and old sound of Black Metal. One of those excellent bands at this technique is Abaddon.

The sound impact which emanates from this band is very interesting. The guitar appears bringing the ancient atmosphere of the classic Black Metal, but at the same time he never fails today's black metal. The band has an extremely important point which is to make the cover art compatible to their songs and it's also an excellent work.

Their latest album is titled 'Ritual de potestades' and it certainly has the original Black Metal power. With creativity and characteristics of the band's country, Colombia, Abaddon sums up with Veterans Records to hit with the release of this album and together they showed the world a great job.

"Tinieblas perpetual" is the first track and it right away shows us the quality and impact as best they can, but different from the old BM. This track features slower drums with more open working pace to the plates. The vocal appears bringing an excellent junction between great techniques to Harsh Vocals without getting tiring, while the more closed parts go on resembling guttural.

Beginning this way, the band couldn't abandon its quality and it makes clear that its sound will stick to your mind. Soon after, the second track titled "Funerales de Invierno" already has a darker side and deep soul of all musicians who can take your soul to a dark forest, immersed in a lot of psychedelia and terror. The guitar is played in saturated forms, always presenting its speed by bringing a lot of energy and, finally the Blast Beat appears to bring a more acid side of music.

The voices in the beginning of the track "Apotegma de Animais" is a way of always showing the band's intensity and creativity. A track can show a faster pace than the previous ones. A pace which is betting on a fairly marked blast and excellent work with the plates. The guitar can show energy all the time without letting the sound tiring and the vocals are always impressive at the best possible way.

The title track is always interesting, because it can always be amazing and very creative, and this rule also applies to "Ritual de potestades", track #4 on the album. A song with a lot of energy and impact, it has a form of dark intensity that directly reflects musicians' souls.

'Ritual de potestades' is a great album, not only because it has great songs and creativity, but also because they seem to know that cover art is an important point in an album. The band made the perfect choice of artwork by making this album something to be remembered.