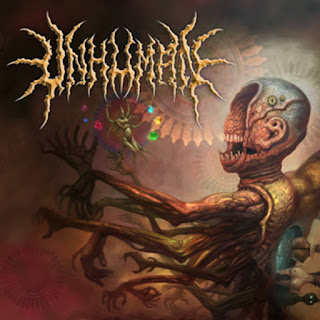 
To be sensational means to be Unhuman which also means this band. Unhuman is a wonderful band from Canada.

Unhuman brings an impeccable versatility and it's full of what would be called soul's insane creativity. Unhuman is a truly flawless and amazing band.

On their only album entitled 'Unhuman', which came out via Galy Records, shows us such a great, great band. To say Unhuman is less than that would be a mistake.
This work's cover art is already really different that conveys technology stuff and other different world with impact. Its cover art is something which, by the way, can also bring a strong combination among the songs on the album.

'Chaotic Equilibrium' is the first track and it starts already bringing chaos and all the destruction that this band can merge with their instruments' sound in the best possible way.
The vocals go through different techniques and still manage to uniquely combine all elements with the cover art and the instruments themselves. The guitar and the bass can at times make all the atmospheric climates this band calls up into an awesome junction by bringing a peaceful and yet different side that throws you into the universe, which makes you closer to other planets.

The track 'Pensées Douces...' begins with all the attentions to the guitar. Of course with a lot of energy from the drums once it is exploring the best possibilities on creating their animal and destroyer sounding. The vocal can play the closed guttural to acute one and vice-versa in a very fast way. This switch of vocals techniques makes a very different atmosphere. This shows that Unhuman is able to be flawless and amazing on every single song.

A very important and different point of this band is their ability to join the Progressive Death Metal by pulling all their creative musicians and their own souls to perform so well done without letting the weight die. Yet, they are able to join their progressive death side to the Technical Death Metal. It isn't something easy once the Technical Death has a very sour and fast feature when producing instrumental lines, but the band can fit them perfectly, not let anything get out of their control, or out of the Technical or Progressive Death, and most importantly, the band never ever leaves originality away from their creating.

Probably the best song on the album is the track entitled 'Once Again' . This world needs to listen to this song, needs to learn that the bass can be one of the most important instruments of a band by listening to 'Once Again'. The bassist did this introduction really something that can stick your flesh and make your soul feel free to go to another planet.

You will hardly find a song with such great power on bass and as well made and thought out like this one, because it's unique.
Vocals are incredible and all goes perfectly. Drums are working flawlessly. Guitar brings a poetic side and a lot of energy to this song.