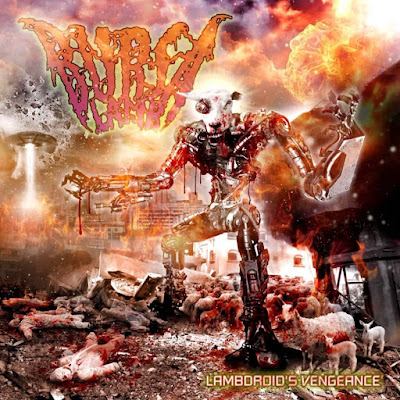 The band manages to bring other worlds to this one.
Bursa Lamb is the band that will get your mind torn apart with tool that doesn't exist in our world. Never doubt anything on this band, because it really is amazing.
'Lambdroid's Vengeance' is the name of the only work of this band and yet it's something really unique by glorifying the Brutal Death Metal with something pretty original.
The first track entitled "Ultimatum" is a perfect introduction track for the album and it transmits a sound of "Lamb" that can build the perfect atmosphere for the second track titled "Beee Metal" that already features the work of the band within the Brutal Death Metal played drier and in a more destructive form.
"D.S.A." it is the third track on the album and it has destructive fast drums. The vocal appears creating its atmosphere like the end of the world.
This vocalist's guttural is something very interesting. He can put on the fans's mind some creatures from another world with such a striking and destructive music that does not leave at any time the rage and creativity missing.
'Lambdroid's Vengeance' is the demonic track that presents the whole planet at its breaking end.
The guitar presents itself very clear on the song with an absurd power to do it all even more striking. The drums don't leave us peacefuly at any time because the chaos within is gaining more and more space and destruction. Vocals can always appear bringing discord and fury. There might be something even more interesting in this song and band, something unknown.
Bursa Lamb is not just a band. They were and still are able to present to the world how to make a unique Goat Bleat style while making everything monumental and memorable within the massive destruction that makes them unique.
A very good point of this band is that they are able to work with the double pedal so correctly.
The band bets too much on the pedal and this makes it even more destructive, more creative and more powerful. Vocals keep it up as best as possible, always lacking nothing. It is a band that can really change things without letting you feel lack of anything.
"I Used To Date Megatron" is a song that begins with an atmosphere of end of the world and this makes the song even more flawless. The bass is shown up perfectly in this song. Drums make the double pedal something from outside of this world. The guttural appears so closed with its grunt because it seems full of sin and pain. This band doesn't miss anything at anytime and that is what makes this album increasingly flawless since the first song 'til the last one. Everything seems so increasingly destructive and otherworldly, literally.
The band also shows on its cover artwork so much creativity while putting out their lyrical theme. Chaos appears on mostly everything on Bursa Lamb. They always put a lot of creativity, technology and, of course, they could not miss the lamb, once it's on the band's name, to make things even more impactful.