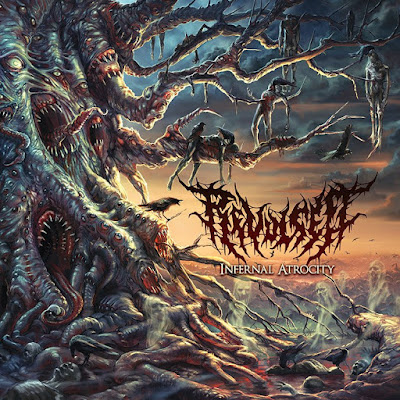 'Infernal Atrocity' is the name of this band you are about to meet. Their job is really well focused on what it needs to pull it all within a little bit more serious and chaotic soul.

The band beOn this work, this band is betting on a well done cover art which brings people's, besides of showing they care about their works from the beginning and Revulsed has shown it at the best possible way.
The artwork is formidable and yet simple. With very detailed techniques, they really thought it out, once it can get stuck inside your mind and always bringing the classic features of the Technical and Brutal Death Metal.

'Rapacious Engorgement' is the first track and it appears impactful while opening the album with blood and chaos.
The drums are played in its driest form with the blast beat as great as possible. They bet on the double pedal which makes it even more shocking and destructive range. The guttural is closed and because of this, it can bring the more classical side of Brutal Death style.

'Agonising Putrid Self-Infliction' draws all attention to the guitar, once it can create a really great sound with energy and gloom. The bass appears when it creates the pulsating soul of profane creatures roaming in the shadows.
Rhythmic and destructive, this track shows up this band's true side of the soul, because you can see it in each instrument, in each musician. This band really bears the flag of their and makes it shine on the horizon with such weight.

To have and present versatility within the Brutal Death Metal music is something somehow very complicated once this genre pulls to the more loaded feeling of hatred that exists in the human soul. It can always leave the same sound, but the band knows how to use it in its best possible way.
The side of the Technical Death Metal really helps the work for the bass player who can highlight this instruments when Sheldon D'Costa shows the true weight of this band.

The track entitled 'Imposed Cognitive Reconstruction' is the perfect living example of how the side of the Technical Death could contribute to the bass line and make it different, well-done to show a greater weight in the band. The guitar in this song can explore solos that let the sound somewhat profane and well marked. A solo like that can score on the song tempo.

'Infernal Atrocity' is the first work of the band and it already leaves it via Permeated Records,. A company that really scores it a lot with this band that is perfect for a true fan of Brutal Death Metal.