Silence Lies Fear is a band that wins the love of the worldwide metal  people at once. With their Melodic Death Metal very well done, they are such a great band! The band's newest work is titled 'Future: The Return', an excellent album that leaves even more flawless this world of Melodic Death Metal. This was an interview that we did on the blog G.Grind and now we are reposting it here on Oroborus blog. Check this band and this interview out!


1. Hi, Silence Lies Fear! First, I would like to thank so much you guys, in the name of G.Grind blog, for this opportunity. I see that many metalcore groups name their bands with “long names”. It’s somehow common on this music style. What was the story behind Silence Lies Fear name?

Jakhangir: Cheers dear G.Grind blog and thanx so much for making this interview with us :) We think that we are more modern melodic death metal band than metalcore band. And the name of the band was chosen very spontaneously, we even don’t remember how.

2. Silence Lies Fear’s logo is pretty amazing. How did you make it?
Jakhangir: Thanx, we also like it very much. It was done by russian designer Maxim Kobzev 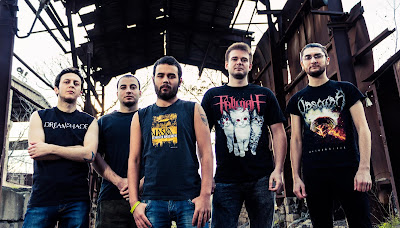 3. Every band’s got their stories about when they were forming. Those first rehearsals and gigs and all the members have gotten their part on it. Can you tell us how did you form Silence Lies Fear?
Jakhangir: Our band was formed in 2008 by me (Jakhangir Zeynalov) and by our drummer Asim Rahimov. We were studying at the same school and listening to the same metal bands so we decided to form a band and try to play and write our own music. We never used to have full line up cause it is really hard to find permanent band members in our country.

4. And what about your individual musical influences. How do they work on the band?
Jakhangir: We always loved such bands as In Flames, Dark Tranquillity, Insomnium, Light This City and all this bands play Melodic Death Metal so we decided that we want to play Melodic and at the same time heavy stuff :)

5. Encyclopedia Metallum shows up that Silence Lies Fear’s lyrical themes are love, feelings and inner struggles. Why choose those ones to write songs about?
Jakhangir: It was in our debut album and in the second album lyrical themes is more about alien invasion and enslavement of humanity and human mind :) So as you see we try to cover up many different topics. It’s not fundamentally to us.

6. You guys are from Azerbaijan and like most of the bands in the world, Silence Lies Fear’ songs are written in English. Why did you choose to sing in English and not in your mother language?
Jakhangir: English is an international language and so everyone can understand it :)

7. Some people call it modern melodic death and some people just prefer to call it melodic death or metalcore. How to mix up those two styles so greatly as we can hear when we listen to your songs?
Jakhangir: Really no secrets or any manuals how to mix styles and music genres together. You just need to try again and again until you will get what you want :)

8. We’ve searched about the band and discover that Silence Lies Fear participate in some festivals. What would you say about your local scene of metal? Is it united?
Jakhangir: The situation with local metal scene is very sad cause we don’t have it at all.

9. Some personal curiosity I have is: do you face some kind of prejudice or mistrust by foreign people for being from Azerbaijan?
Jakhangir: Yes sometimes it happens but it is not disturbing us at all. We are not looking for easy ways to success :)

10. Do you think that are differences between what Silence Lies Fear were in 2008 musically talking and now?
Jakhangir: Yessure both in technical way and in songwriting we became more educated :) 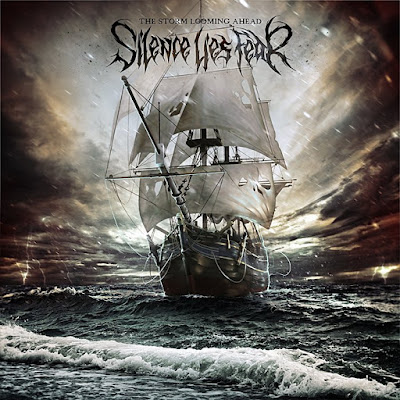 'The Storm Looming Ahead' and its awesome artwork by Spawnfall Design Studio.


11. The album ‘The Storm Looming Ahead’, released in 2012, is such a masterpiece. I’ve listened to it and I was kind of overwhelmed by the album’s killer riffs, those beyond awesome intros and the final song that was perfect ended with storm sounds. What was your inspiration to such a great work like that? And about the composition, recording sessions and mixing thing?
Jakhangir: It was our first full-length album so we tried to make our best. All songs were recorded, mixed and mastered by our drummer Asim Rahimov. It was his first work as a sound engineer.


12. ‘Future: The Return’ was recently released in this year and some people compared it to Dark Tranquility music style. What was like to produce this album?
Jakhangir: Future: The Return was also produced by our drummer Asim Rahimov and by me, but mix and mastering was done by great Danish sound engineer Jacob Hansen on Hansen Studios :) 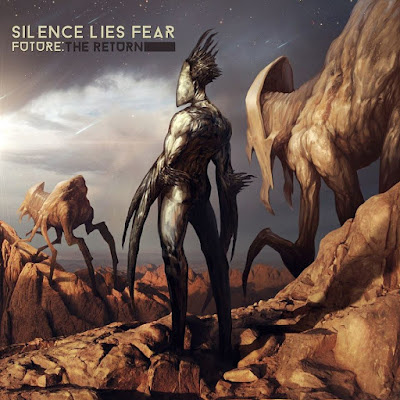 'Future: The Return' and its artwork also by Spawnfall Design Studio.

13. How is Silence Lies Fear agenda for this 2015 ending? And about the future of the band, what are you guys planning of?
Jakhangir: We have plans to release our third album in 2017 and for now we have plans to move to one of the European countries and to continue with our music :)

14. To end our conversation, I would like to wish you the very best to each of you and to the band, of course! This final space is for Silence Lies Fear! We end this interview with this space for you to be free to say anything you want.
Jakhangir: Thanx so much again for so kind words. We really appreciate this. We want to wish all the best to all Metalheads in the world and thank everyone who supported and supports us :) Stay metal guys!