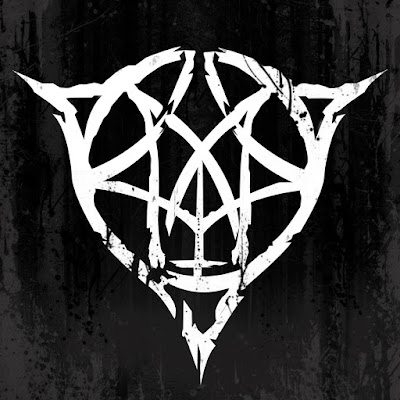 Enforcation is an amazing band that I had the opportunity to meet them because of a show they did with Espera XIII. On this, I talk a little with Victor, one of four people from Sorocaba behind this sensational band. Check it out!

1. Hello, Enforcation! First, thank you very much on behalf of Oroborus blog for this interview. Enforcation is a perfect name for the proposed NWOBDM you have for the band. Where did 'Enforcation' come from?

Victor: Enforcation came from two friends who met on the Internet, Lucas (drums) and Riick (bass). The initial proposal was to make  some thrash from the 80's, when I (Victor) was invited to be the guitar player on band it was also in the thrash vibe, but when Matheus (vocals) entered on the band, he brought several of his influences and his guttural slowly brought us to some death metal style.


2. The logo of Enforcation reminds me slightly of the logo from the Polish band, Decapitated, for being so amazing like yours. Who designed this?
Victor: You must be referring to our first logo. Actually, it resembles the logo of Decapitated. It was made by Nettowolf. We liked it very much until discover that there was already a Latin band that uses a logo with the exact same "word typing" of ours. We had to come up with another with an artist named Yago Dawkings, who did an exceptional job. We're still in love with this new logo that is what we are currently using on the Facebook page, tees etc. 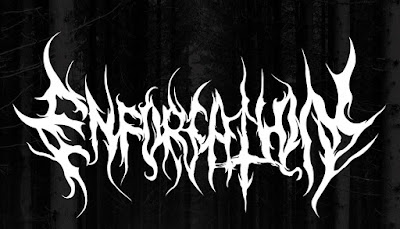 
3. Although the band is on its only two years on the road, it has already defined lyrical themes as gore, horror and suffering, according to Metallum. How does the construction of Enforcation lyrics work to incorporate themselves to the songs?

Victor: Most of the time I like to invent their own story or to modify some existing one. The influences come from various places, from classic movies, even more bizarre stories going to the psychological side. After the instrumental already done, I start thinking about which theme approaches to those melodies and, in a few cases, I am with the theme in mind when I'm writing the instrumental part.

4. What influences that each of you bring to Enforcation?

Victor: In general, we bring the same influences to the band. Such as Death, Morbid Angel and Cannibal Corpse. 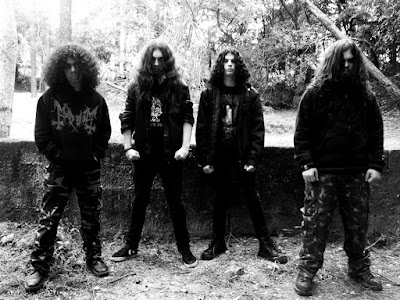 
5. 'Chapel of Screams' is a demo released in 2014. It was the first work of Enforcation. Since that, once can already feel that you sound unique, full-bodied, despite the recording quality as it usually happens with all demos. How was to produce it?
Victor: That time we were already starting to play some authorial songs in shows and we really wanted to have some recorded material to disclose. Matheus (vocals) already had some recording notion, so we decided to record at his house. I made up a collection with the others to be able to buy a fairly good microphone and so we took a borrowed audio interface. I remember pretty much spending the whole day writing, from 9am until 10pm and at that time the result impressed us. We were very pleased with what we had done with so little.


6. In 2014, Enforcation have released a single album containing 'Enforcation Intro' that opens the album beautifully to leave it with certain gloomy atmosphere, only to be replaced the electrifying 'Night of Mayhem', which I may highlight the vocals and speedy riffs. How was to Enforcation on recording and releasing it?

Victor: A friend of ours who followed with a final project in Phonographic Production needed a band to record and be the experiment to the students, so we were the chosen band and were very happy for this opportunity to record in a real studio. The only problem was that the recording date was on the date of my trip, then all the recording of guitars were made by Matheus and while he was recording, I got a piano as a gift and I was beginning to come up with the intro song. When we released it, we had great response, and still think it's the public's number one song.


7. From what we could see on Enforcation's Facebook page, you guys participate in some fests in that region quite often, such as Metal Connection, Bones Rock Fest, etc. How would you describe the scene of underground metal in Sorocaba and region?
Victor: Definitely the high point of the scene is in Votorantim because of its culture politics, called Palco Livre. This free events happen on average once a month always. It brings new and different regions' bands, but without leaving the metal context. Enforcation has played a few times there and it's just amazing because of the audience and the energy of that place, but when it comes to concerts in bars /venues, I cannot say the same, but always have that loyal public!

8. In 2015, came the latest work of Enforcation, the EP 'Pits of Fire and Torment'. How was composing and recording this amazing work?
Victor: It was great! We had new songs waiting to be recorded from the time of 'Night of Mayhem' single, at that time Matheus and I composed separately, but always giving freedom of one to give his own opinion on the music the other produced and when we decided to record, we were very anxious. Now, with a little more knowledge, we recorded in the same schema of the demo, but  the drums and vocals in separate studios, we did what was within our reach and we were pleased with the result. 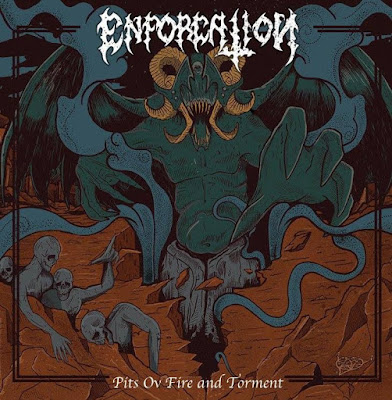 
9. In January of this year, you have done the event 'The Morbid Ocean Ritual Night', for release of the EP mentioned above, next to the São Paulo's band Espera XIII. How was to unite the excellent work of Enforcation with the also exceptional quality of Espera XIII?

Victor: Great experience, Espera XIII has a different theme from ours, but basically the essence is the same. To know these guys personally it was fantastic. In addition to the fellowship, they are great musicians.


10. Two months ago came out the video for the track 'Melody of Immortality'. How was to idealize and record?

Victor: It was a very simple lyric video made by Matheus, using excerpts from old shows, just to give more charm to this song.


11. How would you describe the sound of Enforcation, using only three words?

12. How is the agenda of Enforcation? And are there plans for a near future?

Victor: I do not know when this interview will be posted, but at the moment we are only booked with a show at Brutal Metal Fest II, with many fucking great bands of extreme metal and the North American, Master, as headliner, on December 6th. Our next plan is to record a single and a video clip showing our new identity. The release is scheduled for early 2016.


13. To end our conversation, thanks again for the interview opportunity and I wish success to each of you and to Enforcation. The final space is free for you!

Victor: Oh, we thank you! I would say that we are selling our latest EP and the shirt on the same title 'Pits ov Fire and Torment'.EP: R$20 and T-shirt: R$35. Buying these too, you can pay only R$45. The money raised will be invested in the recording of our first professional video clip! Thanx, hugs!