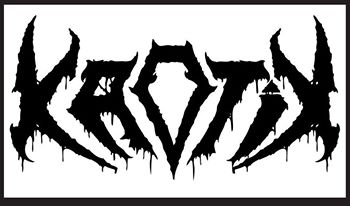 
Kaotik is a band I met on Encyclopaedia Metallum, on its random band section. I liked the name so much that I went to YouTube and check out their work. And I got really amazed with it! Check this band and this interview out!


I.             Hi, Kaotik! I’m thankful on behalf of Oroborus Blog for this opportunity to interview you guys! It’s somehow common to old school death metal bands to have names as impactful as their sound, so this is what happens with Kaotik, too. Why did you choose this name to represent the band?

--Well, There's no big answer for that one. we just wanted someting simple, badass and understandable in both english and french. Fred came with this Idea back in 2007 and we all thought it was cool so we rolled with it.


II.            Kaotik has five members now, right? What’s the story behind the formation of the back then in 2007? And, what would be the main musical influences each of you bring to the band?

--You know we're really just a bunch of guys that happen to love all kind of metal and to play music so we got in a room together and started jammin. We like to say we represents old fashioned death metal and we try to stay true to this genre and its history while adding our own personal touch to it. 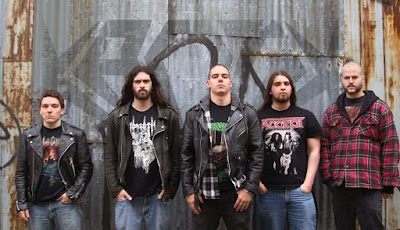 
III.          Encyclopaedia Metallum says that your lyrical themes are zombies, horror, murder, war, invasion and terror. So, how do you guys compose your lyrics? Do you guys research on the literature or history books?

--Not at all actually, or very little, we like to keep things simple, if we're gonna write about an historical event, we're gonna stick to the basic and what we know about it and, you know, the exact veracity of the said event is not the point, the point is the brutality and violence that occured.  And yeah Encyclopaedia Metallum got it right, those themes are pretty much what we like to write about!


IV.          Kaotik’s first work was released in 2009. ‘New Born Khaos’ was a really great way to start! I would highlight the “Cannibal Cops” and “Born To Kill”. How was it to compose and record this work? And what it about that artwork? That one really has a thrash soul!

--We started writing New Born Khaos back in 2007 we were much younger and some of us didn't even have any facial hair yet so you can understand the mindset was very different back then. The recordinbg process was kinda weird cause even though we we're fairly good musicians, it was the first time in the studio for all of us and it also involved a lot of alcohol but everything went quite well. 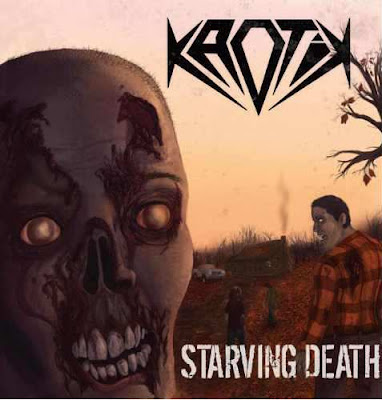 V.           The second work is the first full-length, ‘Starving Death’, which came out  in 2011, via independent. I would highlight the songs “Lobotomy”, “Bad Awakening” and the last one “Inbreeding”.  How was the recording process on this album? Also, on this work, some famous people featured with Kaotik at the vocals, Dan Swäno and Luc Lemay. So, how did this partnership with them happen?

--Recording process went way better for Starving Death since we had much more experience in the studio. Pierre-Luc met Luc Lemay at Maryland deathfest in 2010 and told him about our project, the guy was pretty open to the idea and things went smoothly from there. We also wanted a back vocal like "infestdead" and since Dan Swano was already mastering, he did the vocal. It was great having Mr. Swano on the album since he is so easy to work with.


VI.          The latest work of Kaotik was released last year and it’s the band’s second full-length! You see that this is an awesome work since the first time you see its cover art by this well-known figure in the death metal world. It seems that Kaotik became a little darker. Also, the sound became heavier, little pushed to the death metal side of the force (laughs). ‘Torment’ is certainly showing us that the further Kaotik goes, the better it gets! Can you tell us a little about how this masterpiece was made?

--We're getting more comfortable with old school death metal as time go by and to us, Torment is the evolution of Starving death so apart from improving our sound, the writing process is about the same, we mostly compose songs by jammin random riffs and keeping the better ones but once in a while someone brings a finished song to the others like Alexis came up with "Mentally Dead" and Sam with "lobotomy" on Starving Death for exemple and we are open to this way writing too. We are very proud of Torment and we feel like this is our best work yet. 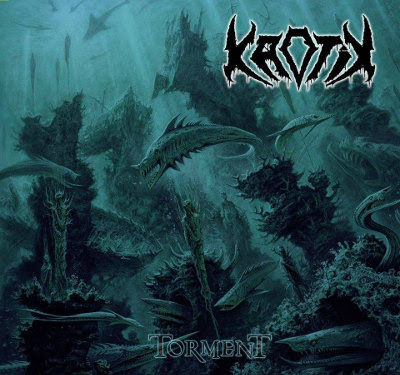 
VII.         So, after we talked about all your works until now, how would you define the evolution of your music?

--Pretty naturally, we listens to all kinds of differents metal and non-metal but we're all 100% satisfied when we make up songs. We don't even have to talk with each other about how we're gonna write stuff so things goes naturally.


VIII.       What would be the sentence to describe Kaotik’s music to someone who didn’t listen to it before?


IX.          You guys played at so many places in Canada; Kaotik was at W:O:A Metal Battle in 2015 ! What do you guys think about your local underground metal scene? And, besides Kaotik, what underground bands would you guys recommend to a metal fan?

--We haven't been around all Canada yet but we can say that the the underground scene has grown pretty big in the last few years around Quebec. see : Outre-Tombe, ÜltraRaptör, Saccage, Torturer, Survival Instinct, Atroce, Soiled by Blood. and its only getting better and better as time goes by.

--We sign up with a big label with Starving Death and things didn't went like we wanted so we approach smaller labels and we ended up signing with "Unleash the Underground", things goes much more smoother that way, comunication is way easier when you don't have to cross an ocean to get a respond, even with the internet and all social network today. We feel safer with an "underground" label and so far with don't regret anything

XI.          Do you guys think about touring to South America someday?

--If we have the chance to then why not. South America is definitly a part of the world we'd love to tour in, we heard metal shows are pretty crazy over there.

--Before going into the third album we are gonna record a EP and experiment in B tuning with a lower, darker and a bit "dirtier" sound with maybe a cover or two and there's also a couple of shows on the schedule as well. In the last few months everybody in the band has been quite busy with their side-projects but we are shifting the focus back to Kaotik and we want to make 2016 a big year for us.


XIII.        And to end our conversation, I would like to thank you guys again and wish all the best to each of you and to Kaotik, of course. Thisfinal space is for you to say anything you want to!

Well, all thanks to you for the exposure and the support! We look forward to spread our music in South America and every possible country!