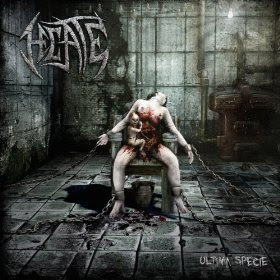 The latest brutal kingdom of Hecate was titled 'Ultima Specie' and with the sound of all deaths, the work of this impressive Italian band was born.

Hecate presented differently this work. An EP that came out via Revalve Records and contains 8 tracks, but none of them has more than four minutes.

With this extremely fast, well done and brutal work, the band surprised us all and showed that you wouldn't have to jump to the next track because the current song has only one minute and you maythink that this is an instrumental song, you are so very wrong! Hecate doesn't work like that.

The way of making the initial thirty seconds of the track "Anneliese" completely instrumental realy works and it works pretty obscure. This song opens the EP and already shows the quality of the band, because with a simple sound like that, Hecate could put some tension in the air and also a perfect atmosphere for the next tracks.
"Ultima Specie" is the first track name. This song has vocals and they bring a pitiless brutality built up within an absurd depth. The guttural can be really surprising, turning  this junction of voice, weight of riffs, burned and bloody drums and even its cover art perfectly to the whole band's act.

With only 1:37, the selftitled track is already bringing it all to its complete brutality. Then, immediately after, appears this two minutes song entitled "Senza Pieta" that presents to its listeners a very interesting part of the band Torn and harsh vocals are leading the song at some times while on other times, the guttural comes out and it makes all the difference once the song finally becomes even more interesting and deeper. The falls that "Senza Pieta" features are actually fundamental to the song's weight to get better and better. Drums work in a fantastic way with the double pedal, and in a short time, the band puts a Groove Metal structure onto the song, turning this track one of the most amazing ones on this EP.

The unknown pathway that Hecate presents leaves lots of questions in the air, but the answer comes with their striking and worthy Brutal Death Metal destructive side songs. On the whole album, we can hear and understand the weight they are working with. You think that everything seems overwhelmingly done and already on the edge of perfection, then the vocals get heavier, amazing every listener! The existence of this track called "Indignati" is the proof of Hecate's destructive power. A more open vocal appears and the guttural comes soon after and this two styles make the song reach another level of weight. Hecate is always surprising us in a positive and brutal way.

With its more cadenced start, the song called "Bestia Quiet" brings hatred to the listener's eye and somehow can drag his/her soul to some kind of torture room. The guttural with cadenced drums works pretty well with the plates and the bass creates a chaotic cloud above everything else.