[English] Circle of Noose: The Early Circle... A Ghostly Noose Around the Neck 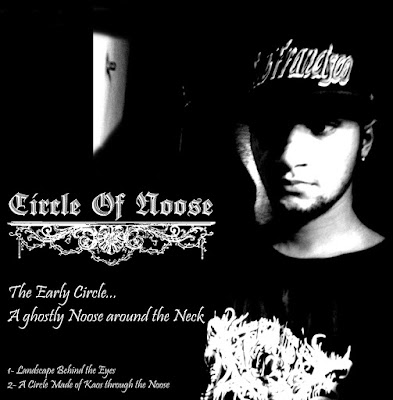 Grim (vocals and all instruments)
'The Early Circle ... A Ghostly Noose Around the Neck'. This is the endless name of this one-man band's EP.

Circle of Noose brings such a journey with the Experimental Black Metal at its side, like its loyal friend. There's always a guitar featuring the songs and creating melodies like the final hours of a sunny day that carry you intantly to some sort of solitary places.

This destructive and torn form of Black Metal does not disappear on this project. Don't let it fool you to think that this BM side will go away at some point because the track starts slow and then it goes through it all. This Experimental BM One-Man Band can put these two parts together in a song that makes you dream about something bright on your life and also cry drwoned in pain with the same song.

'The Early Circle ... A Ghostly Noose Around the Neck' came out via independent early this year's February and it has only two tracks, but by these two you can know pretty well how the musician, Grim, works.

The first track is titled "Landscape Behind the Eyes" and it can perfeclty show us how to join in an atmosphere of pure melancholy to make you stop and reflect for a moment on a particular rainy afternoon. This song line was built by combining the very well played guitar with the fastest drums it could have had and Grim's harsh and torn vocals. This all put together, turns this track into something really powerful to take you to lots of different feelings, it brings you some mental confusion within the pain and anguish of just being alive.

"Landscape Behind the Eyes" is the first and penultimate song, so it is responsible for opening and preparing the listener to the end of the EP on its best possible way.

The Experimental Black Metal was a perfect choice for this project/band. Using this subgenre, Grim manged to expand the BM genre and make those tracks very well made, absorbing the best part when it comes to home production.

The second and last track is entitled "The Circle Made of Kaos Through the Noose". It does not leave at any time the feeling of melancholy become more impactful than the confusion of noises created by the vocal. Grim's vocal uses a very interesting effect to expand its rotting side and with this, he's able to reach the most  overlooked parts of a soul.

Check this work on this Bandcamp link!