[English] Deathronic: destroying it all with its symphonic death metal

Amine Andalous (all instruments and vocals)

I.  It is a huge pleasure to talk with Deathronic, more precisely Amine Andalous. Thank you very much for giving a little bit of your time to Oroborus Blog. I, Renan Martins, I am a fan of his work. It's something really amazing! Your musical versatility is alive in each track and always lacking nothing. Being a one man band at the time helped to create something so different?
Thanks Renan, for the interest. I composed some tracks few years ago, and wanted to release those songs through an album. I wanted through that project, to experiment with Symphonic Black Death Metal by combining several influences such as electronic music, oriental…
In general, I try to give each composition its own character. The track Bloody Lust for example, has a heavy metal influence while Kalila Wa Dimna is more symphonic. I also experiment clean vocals in the track Anno 1423 which can be considered more gothic or doom. I really wanted to experiment my open minded view of composing, without focusing on any one specific current… And being a one man band let me do that …

II. What are the main influences of Deathronic in order to create a sound so versatile and impactful?
I have many influences spanning over various Metal periods, from Old School Heavy Metal, to 90’s Death Metal, Modern Black Metal, etc. With “Duality Chaos”, I wanted to express my seamless view of Metal, where all the styles are permitted, without focusing on one specific trend of style.

III. The number of one-man bands grew in recent years. I believe this is more because of the technology to provide virtually everything for the musician, making their life easier, so that the musician can even have home studios. Do you believe that this number has increased due to this technology in music field or is it due to the difficulty to find and deal with other musicians?
Yes and Yes :) In my opinion the greatest example in that kind of projects was the Great “Diabolical Masquerade” created by Anders Nyström (Katatonia). That masterpiece One Man Band started in something About 1995 ! So Yes, Since that Era, technology helped musicians to build “solo” projects .. while building bands is always, “complex” because of human relationships, everyone’s life constraints… 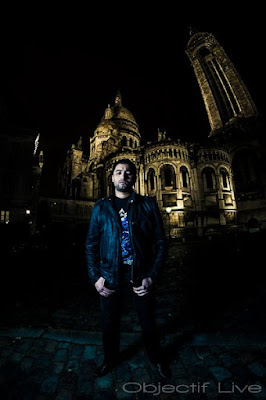 IV. Since Deathronic is a one man band, how the critics receive Deathronic’s works?
I was very pleased with the positive feedback I received, especially with this being my debut release. I’m very satisfied! The songs Kalila wa Dimna and Disharmonia were nominated in the Independent Music Awards in 2013 & 2014 (Metal Song Category). I was really surprised and pleased by these nominations.

V. Is there any special artist/band that made you have interest in learning to sing and play instruments? If so, what would it be?
As said Before Diabolical Masquerade was a real Influence for me. I was also influenced by Chuck Schuldiner, an artist who influenced several generations with his Masterpiece project « Death ». The name “Deathronic” is, first of all, an homage to Chuck Schuldiner.

VI. How is the underground metal scene in your country?
The French underground scene is really rich with talented bands. Especially in the Paris area, there is a really dynamic scene with a lot of concerts, small and underground festivals. I can recommend some talented Parisian underground / emerging bands : My friends from, Corrosive Elements, Moonskin, Kortex, Skulldog …

VII. How was the process of creating and recording the incredible videoclip for the track "Anno 1423"?
Thank you… Well, Regarding to Anno 1423, musically, I tried something quite different compared with the Symphonic black Metal or Death Metal feel that’s present on the other songs. Also, I wanted to experiment a clean voice on one of my songs.
Regarding The Music Video, the story I imagined, is about a post-apocalyptic environment, as a result of human scattering Wars, Violence & Earth Destruction…. It’s quite close to the main concept of the album.
I worked with a friend, “Milo Lee”, a very talented Director, and some friends helped us… to make that music video real …

VIII. The artwork of "Duality Chaos" was designed by Seth Siro, right? Why did you choose Seth for this work?
…Seth Siro Anton is a great artist and he is really supporting debut project like Deathronic. It was an honor for me to have my album’s cover made by him. The Artwork, he created, describes very well the album theme.. and also the atmosphere I wanted to transmit. 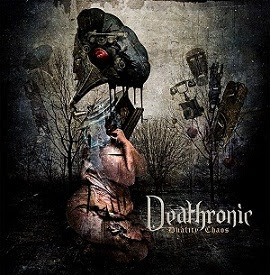 IX. Are there any plans to record videoclips to other songs of "Duality Chaos"?
May be for the song Bloody Lust.

X. What are your plans for 2016?
Well, I’m currently focusing on my side Project “Heavyction” (Industrial Death Metal Band), but I’m also working on the next Deathronic’s release, the next album, a full length one. Several songs are ready but I will take the necessary time to release it. I’m actually recording the First Heavyction’s EP, and also preparing the first Heavyction’s Music video …. We are planning to start playing live very soon ! So very exiting plans coming soon !

XI. To end this interview, I would like to thank you again for your time and attention and also thank you because I interviewed this band and this was a dream of mine. My best wishes and success to you and I let this final space for you to say anything you want to.
Thank You, Renan and Thanks to Oroborus Blog, for supporting Deathronic and emerging projects…