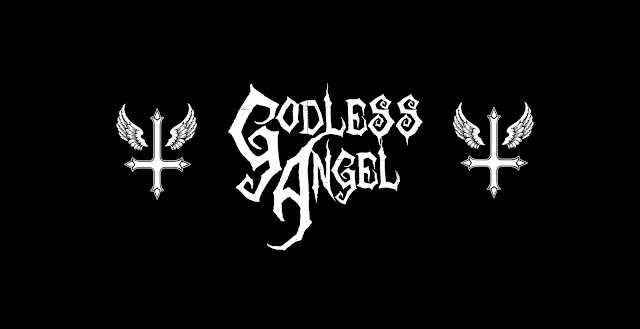 Godless Angel is a band Renan Martins presented to me. I really enjoyed this band and I got pretty shocked to know that such an amazing sound can still be perfectly done by just one very talented person.

I. Hello, Derek Neibarger! First, thank you so much for sharing a little bit of your time with us on this interview. So let’s talk about your influences: what artists do you consider as the greatest contributions to Godless Angel music?
Derek: Hi, Renan! Thank you for giving me the opportunity to talk about Godless Angel. Everything I listen to influences the way I write and play in Godless Angel to some degree, but some of the most influential are bands like Slayer, Cannibal Corpse, and Six Feet Under. I’m a huge fan of old school death metal and I’ve also drawn inspiration from 90s bands such as Carnage, Obituary, Massacre, Mortem, Demigod, Tyrant Trooper, and Gorguts. And it’s not just the music of that era that appeals to me, I love the production and the way those albums sound. There’s much more clarity and you can actually hear the guitars. Too many current death metal albums are all drums and vocals with the guitar and bass tuned so low and buried in the mix that you can’t even distinguish the riffs under all the blast beats. It’s refreshing to hear artists like Gruesome returning to that 90s era production style, I would love to hear more of that in today’s young death metal bands.


II. We’ve been searching for the band’s information and we read that you once shared stage with Neurosis and Green Day and it surprised us because the differences between Godless Angel death/thrash metal style and their alternative and punk rock ones. Can you tell us how it all went?
Derek: The partnership with Neurosis and Green Day took place in 1990. I was the vocalist for a punk/metal band named 2Car Family and we headed to the East Coast for a summer tour. For a string of gigs we hooked up with the aforementioned bands and it made for a very interesting show. Green Day was light and fun, 2Car Family was spastic and more than a little odd, and Neurosis was incredibly dark and intense. We were all unsigned at that time and traveling together was beneficial; we shared meals, added one another as openers to previously book gigs, assisted with busted gear and broken down vans, and enjoyed the camaraderie. I could write a book filled with all the stories, experiences, and great memories of that tour. It was a really great time! 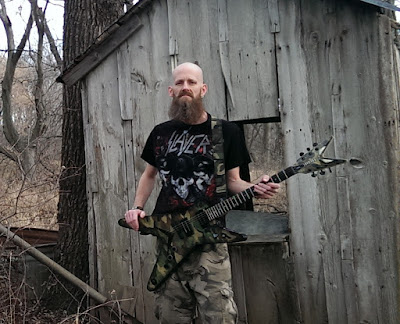 This is Derek Neibarger, the man behind Godless Angel!

III. Songwriting is one of the most beautiful ways to express yourself and, at the other hand, one of the most complex, though. Since we’ve known that you wrote ‘Year One’ in incredible twelve months only, is this process somehow easy for you?
Derek: I love everything that goes into the songwriting and recording process. If not, I wouldn’t have continued to do it for the past thirty-two years. But it has become far more complex and time consuming since I first began Godless Angel in 2012. The songs are longer and are often made up of five times as many parts as a typical song. Things that were once fairly straight forward, such as writing drum tracks or recording guitar solos, have evolved and become much more complex. But honestly that’s a good thing because it means that I’m growing as a musician and songwriter and challenging myself to make each song better than the last. And no matter how difficult the process becomes, I still love it and I’m still addicted to it.


IV. About the lyrics, why to write songs mainly based on horror, death and occultism?
Derek: From the very beginning I’ve always wanted Godless Angel lyrics to be fun and timeless, so I decided to approach each one as a short story. I love horror and science fiction and both of those genres fit perfectly within the death metal sound. My wife, Chrissy, began assisting me with lyrics on my second album, “Dying Dead Undead Unholy”, and went on to play an even larger creative role on the next album, “Harvester of Shadows”. For that album she came up with the lyrical concepts for six of the nine tracks. She loves horror and science fiction just as much as I do and she’s extremely creative. Godless Angel is better because of her involvement and I can’t wait to see what she comes up with next. V. If there’s anything I, personally, am very interested this would be band logos. Looking at Godless Angel logo we can easily see that it fits with the lyrics and maybe has some Tim Burton inspired drop mixed. How was the creation of the logo?
Derek: Unfortunately the story behind the logo isn’t the least bit exciting. I simply tried out various fonts until I found one that I liked. When I created Godless Angel I just wanted to write for myself and not worry about what anybody else thought. I never expected it to take off the way it did. In hindsight I should’ve hand drawn the logo myself, but after four years I’ve become pretty attached to the it and it's hard to imagine any other in it's place. With that said, I did recently make a few minor alterations that make it more personalized and not just another font. The revised version will make it's debut on the next Godless Angel album.

VI. It’s amazing that a band so well produced can be raised by one single person’s bunch of great ideas. A one-man band project has always been something you wish for this band?
Derek: I started writing and recording as a solo artist in 2001. By that point I had been performing with various bands for seventeen years. I was burnt out on doing live shows, traveling, and being part of a group, but I wasn’t done being a musician and an artist. Ever since I purchased my first bass guitar, in 1984, I’ve been obsessed with songwriting and recording. In the mid-nineties I began experimenting with home recording software as a way to create demos of new songs to take to band rehearsals. When my last band ended I began recording full, multi-layered tracks on my own and immediately fell in love with the process.
Being a “one-man band” allows for tremendous creative freedom. The quality of my songwriting dramatically improved. I can take as long as I need to revise and perfect a song since I’m not limited to weekly band practice or costly studio time. I don’t think Godless Angel could’ve happened outside of this setting because I needed to be able to grow and evolve the sound at my own pace. That’s basically what’s happening on “Year One”. The songs are in chronological order so the listener can hear the Godless Angel sound being brought to life, one track at a time. 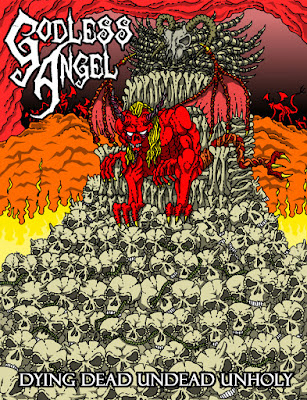 'Dying Dead Undead Unholy' is the second work by GA, it's a great, great EP.


VII. I’ve been listening to your work available on YouTube and something to notice is that you always play such powerful intros to every GA song I’ve listened to. Then, I would like to ask if it’s something planned or not to add those great intros to each one of them?
Derek: Thank you very much! Intros are almost always the last thing I add to a track. Not every song needs one but sometimes they give it that little extra bit of personality or atmosphere. But sometimes you just want a song to hit hard and heavy right from the start. It’s great to know that the extra work is appreciated!


VIII. Godless Angel is really awesome, I admit. I’ve heard about the band and I’m from Brazil, so far away from USA! How do the people from your country, your city and so on, react when they listen to what you have been producing with this band?
Derek: Thank you for the kind words! Brazil is the home to so many killer metal bands, such as Vulcano, Krisiun, Mental Horror, and one of my favorite new bands, Nervosa. It makes me extremely happy and proud to know that I have fans there! I’ve been incredibly fortunate with Godless Angel. It began as something very personal and self-indulgent with no expectations. I never could have predicted the journey that lay ahead. One of my biggest supporters is Islander of the metal blog No Clean Singing, which is based out of Seattle. He introduced Godless Angel to NCS readers around the world. Since then I’ve received a great deal of support from fans, blogs and radio stations both in the USA and overseas. It still blows my mind when I get interview requests from other countries, such as Brazil, or autograph requests from France. In 2014 I was contacted by Inverse Records, in Finland, and a year later they released my third album, “Harvester of Shadows”. In December of 2015 that album was #79 on the Top 100 Metal Albums of 2015 for Antichrist Magazine, which is based in Ukraine. Anytime I start to think that things are calming down I get another reminder in some form or another that people are still listening to and enjoying Godless Angel. It always puts a huge smile on my face and I’m eternally grateful!

IX. Even for a one-man band, do you ever think about bringing Godless Angel to shows?
Derek: At the moment there are no plans for a live version of Godless Angel, but I’m not ruling it out entirely. It would pretty exciting for me to hear these songs performed by a full band and to see the audience reaction. I think Godless Angel could make for a killer moshpit soundtrack! Maybe it will happen someday, we’ll just have to wait and see. 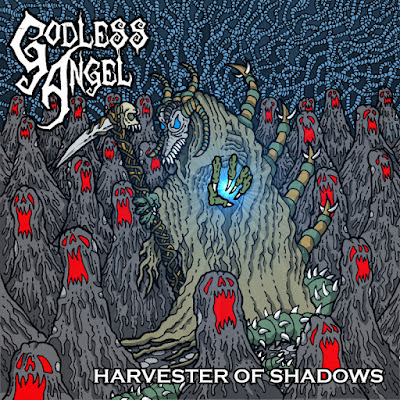 The latest work is this full-length called 'Harvester of Shadows' which amazed me since the first time I listened to it.

X.  Again, thanks Derek Neibarger for sharing your great work with us. We end this interview with this space for you to be free to say anything you want.
Derek: Thank you as well, I enjoyed answering your questions! I’m currently working on a new Godless Angel album which will be released on April 4th. In the meantime you can find my first three albums on Bandcamp (click here) and you can follow Godless Angel on Facebook (click here). Thanks again!