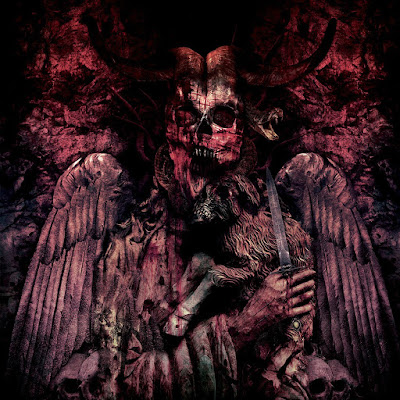 
The band that bathes the lamb with blood. Bane is the one who owns the ability of showing us their riff's darkness and poetry, totally immersed in chaos.
Probably you don't know the work of this great band, but once you listen to their albums, especially the masterpiece 'The Acausal Fire' you will be able to feel the fire power created by Bane.


'The Acausal Fire' came through Abyss Records and without wasting time, the band brings the track "The End of Humanity" as you can see by the title, it already give us a great expectation. The band's sound  surprises us by the quality and power, so that everything is constructed while building an atmosphere of pure hatred and pain. Like a poem that was written in blood. The guitar can right away show riffs very fast. Leaving a sour sound, always alive on the bottom makes all the difference on the tracks. "The End of Humanity" can open the album as best as possible.


After bringing both impact and destruction, the band couldn't go the other way. "In Endless Silence" is the second track name, but unlike the previous one, it brings a side pulled to the melodic line on riffs. The speed remains high, but the sound is more open and somehow it creates light shine within obscurity. The guttural presents its power all the time. It's always making the perfect junction with the bass which never misses power.


"The Chaos Rises" comes with both feet slamming at the door and this is meant to be one very peculiar characteristic of Bane. Vocals can take the whole space with its dry style, maybe torn at times. At some points on this song, the vocalist uses his chest voice and this brings something beautiful to it. Bane really  makes it flawlessly and it all shows how their work was well thought out.A well-made art always helps a band even more. This is what happened with the artwork for "The Acausal Fire". It bursts complete, fitting together music and visuals, because the art is extremely well made and completely compatible with the band's sound proposal A destructive guise like that can always change your way of listening to the band's work.


"Light the Black Flame" is the next track and this song is actually one of the album's best. It has a great power on the drums which focuses on creating a Blast Beat, used all the time on the album. A guitar that continues with a very quick riff, but turning it more and more obscure and then focus on the melodic side. Also, vocals features a more ripped side, making it an even greater impact.


The work of the band is a combination of Black, Death and Melodic Death Metal. Thus, forming a possible Black Death Metal with the best possible qualities.  With this work, Bane sounds very reminiscent of  Behemoth's early works with a bit of Belphegor's, which results on a perfect junction to do it more and more solid.