Arthanus is an amazing band that I met because of the video they made for the song 'Asgard Palace'. The viking death metal composed by Arthanus is really amazing! Check out the band and the interview we did with them below.

Thiago Ferreira (vocals)
Saul Peghin (guitar, vocals)
Fellipe Magri (guitar, vocals)
Atila Paloppi (bass)
Gustavo Abreu (drums)
Genre: death / viking metal
I. Hello, Arthanus! First, I would like to thank you guys for the opportunity on behalf of Oroborus Blog. Arthanus is a strong and imposing name. How did you decide that this would be the right name for the band? And a personal question, what is the correct pronunciation of Arthanus?
We are so thankfu for being part of this!
So when we were choosing names to the band, we wanted it to refer to a Nordic one. We had a character that was a Viking warrior and we named him Arthanus. So Arthanus is a proper name. This is the name of our character; and it's pronounced "ArTANnus".


II. The logo of a band is undoubtedly something extremely important to the band's identity. How was to create a logo as interesting as this? A logo to fit in the proposal of death /viking metal?
This logo we use today was the third we created. We had some friends who helped us to create and adapt it, to make it suitable" to our sound proposal. We knew we must have some characteristics to fit with our lyrical theme and thare we went, adapting everything. We really hope that we are going to stick with this final logo and it will give us the identity we want.


III. The death / viking metal, connected to lyrical themes such as Norse mythology, Vikings and war looks completed. Why did you choose these themes for Arthanus?
We chose this theme because it is a subject that we like and a theme we never put onto a band before. All the members had already played many styles within the metal with various themes on other bands, but none of us had never really dealt with and defined this issue as a theme line to follow. Perhaps, this was the main reason.


IV. When a band is formed, each brings its sound references and ideas, etc. What are the main musical influences that each member brings to the Arthanus?

Not always musical influences are clearly shown on Arthanus' compositions, but to better define them, let's separate by each member references:
Thiago Ferreira: Bands that I started listening and I still do it nowadays: Cannibal Corpse, Nile, Slayer, Behemoth, Krisiun, Asesino, Sepultura, Deicide, Morbid Angel, Kreator, Exodus etc, etc, etc...
Saul Peghin: When I started, I was inspired by guitarists like Malmsteen, Dave Murray, Andy LaRocque, Adrian Smith and Glenn Tipton. I learned to play by following this more technical and melodic line. Currently, I keep my early influences, but on Athanus we were adding styles that somehow ended up influencing me today. Such bands like Bathory, Burzum, Graveland, Iron Maiden, Nitberg, Kroda, Branikald among others. The bands that I play on (Arthanus, Walsung and Evil), you will see a little of it all.
Fellipe Magri: When I started listening to musics, some of the bands that influenced me were: Iron Maiden, Helloween, King Diamond, Blind Guardian, Megadeth among others; of course, over time, our taste in metal finishes ranging and always for the more extreme side, so to name some bands that made me transcend the styles, I would say: Bathory, Burzum, Kroda, Drudkh, Thy Light, Dimmu Borgir , Gorgoroth and so on.
Atila Paloppi: I started listening to national metal, 'Arise' by Sepultura, to be more specific. From there, I began to increasingly listen to extreme metal and, over time, I improved my ears by ranging from the metal styles to come up with some things on classic rock'n roll. The main influences are: Sepultura, Krisiun, Morbid Angel, Cannibal Corpse, Deicide, Sarcophagus, Slayer, Possessed, Burzum, Bathory, Krisiun, Amon Amarth etc.
Gustavo Abreu: Influences: Bathory, Burzum, Mercyful Fate/King Diamond, Sepultura at its beginning, Death, Amon Amarth, Slayer, Krisiun, among many others. I'm influenced by everything I hear because, being a percussion fan, I have a lot to absorb from classical music to the most extreme metal. 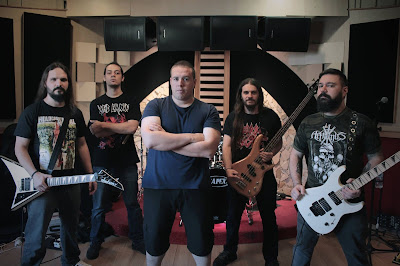 V. Now a bit about the history of formation of Arthanus that started in 2010. You gathered and "Let's make a band this and that ways..." and this meeting came up with the Arthanus we know today? Even today, according we've researched, Gustavo Abreu replaces Rogério Luque on drums, right? How did this partnership happen?

It all started in 2008 when guitarists, Saul and Fellipe, who previously knew each other, decided to get together to start a band like Arthanus. Some compositions were made while arranging other members to compose the band. Soon, the drummer Rogério joined and the rehearsals in the studio began. Three members were playing the songs that are on the 'Asgard Palace' EP and also some others that were emerging  at that time.

Shortly thereafter, and after some vocalist have passed through the band, we invite Thiago for the job. We already knew his work on Decried and liked his guttural so much. He accepted and already in the first test we decided that he would be in the band. As for the bass, our friend, Atila, took the place right after our former bassist, Bruno Abbate, left the band. We already knew Attila and so it was very easy to decide that he would be a responsible person for the work.
As for Gustavo, unfortunately our drummer, Rogério Luque, went through serious health problems and had to move away from the band for indeterminate time; and once we already knew Gustavo, because we have played together a few times (playing with Thunder God - Amon Amarth Tribute band), we decided to call him to replace Rogério. He accepted and from this day on, he is with us in the band.


VI. Using just three words, how would you describe the sound of Arthanus to someone who have never heard the band?
In three words would be: Viking Death Metal. If we could describe us better, then the conversation would be a little longer!


VII. 'Asgard Palace', launched in 2013, is an EP that is honestly amazing. Consisting of three electrifying tracks, tremendously well made, whether in lyrical issues or even musical quality. Once and for all, an EP that you never hear just one time. How was to compose and produce such a masterpiece in an independent way?
First, thank you again for the words! It is really gratifying to know that we have achieved this goal. But come on, recording independently is more than common when it comes to the style of music we listen and enjoy. All the recording was funded by us, the band. We all invested in this project and it was coming true. 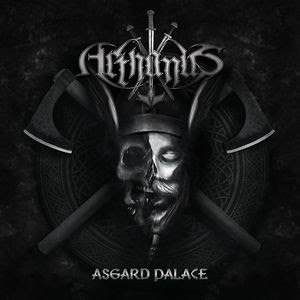 The 'Asgard Palace' EP and its amazing cover art.

VIII. Arthanus has always be present at events like Odin's Krieger Fest, Asgard Fest, Feira Entre Mundos and Thorhammerfest. Therefore, what do you  think of the underground metal scene?

It is important to have events on the metal scene today. It is a scene that is growing every day and the number of events are increasingly happen. So real and prosperous.

IX. If we ask you guys to name only one show, which would be a memorable one in Arthanus' history?

To name just one, it would have to be our last show in Odin's Krieger Fest. That was fantastic. Only a festival with local bands and a really great structure. And what made it unique for us was the way the audience received us. The crowd was there, banging, from beginning to end. It was really special.

X. As we have talked, most Arthanus' shows have taken place in Sao Paulo. Is it part of the plans to make a tour around the Southeast of Brazil, maybe the rest of the country?

Yes, it is certainly in our interest to play in the other regions. For now, it is only in our plans, but who knows in the future we will have the honor of being invited to play there.

XI. Arthanus entered in studio later in 2015, right? Is this the Arthanus' first full-length album coming?

Exactly. We are on the process of finalizing our first full-length. We recorded nine songs, which two of them are from our EP and 7 of them are new. Just let us make it clear that the songs on the EP were completely rewritten and are therefore they will appear with a new "face".

XII. How is Arthanus agenda for 2016? And  about the future?
In 2016, we are scheduled only for Thorhammerfest which we are on the greatest expectation.
Now, if you follow the Arthanus' show schedule, you will realize that we do not have the habit of playing a lot. Our show average would be one in 1 or 2 months. But once our first album is out, we are interested, yes, to start playing more often and in places that haven't played yet.

XIII. And to finish our conversation, I wish all success to Arthanus and to each of you and also, I thank you again on behalf of Oroborus Blog for your time and consideration. The final space is for you, Arthanus!

We would like to thank you for the compliments and for the space you have given us. We also wanted to say that we're relieved that there are blogs like Oroborus, that keep the metal always active. We expect to see you at many of our shows.