[English] Vulture: the agressive death metal through the vulture's eyes

I. Hello, Vulture! First, I would like to thank you guys for this interview opportunity, on behalf of Oroborus Blog. Searching on the band's  information, we found that it already had the 'Damnation' name, back then in 1995-1996, right? How was to find a proper name for the band and consolidate it Vulture?
Adauto: It wasn't an easy task the one to find a name for the band. Me and Marcelo, a member who started the band with me, we suggested many choices, but whenever we researched about that name we chose, we already found a band with that name. We've decided to use Damnation, but after a while we found out that there was already a death metal band with that name. We went back to the start again. I got a dictionary in English and started searching for short and simple names, that wouldn't be the standard names used at that time, they were all like somethingITY or somethingTION.

Then I faced Vulture and I liked it at the very and also I didn't know any death metal band with an animal at its name, but this bird, vulture, has a very close connection with death, this bird needs death to survive. So, I thought it made the perfect link with our style. Introduced it to Marcelo, he liked it and did some research, once nothing was found, the name was stablished. Today, I know that there are other bands called Vulture around the world, but I believe we are among the oldest ones.

II. The same that happens with Krisiun among other bands in the metal worldl and music in general, you guys play among your siblings. How is to have band, which is already treated like family, but also is blood family?


André: I think things are easier when we keep in contact because we are family and we have solved so many things, we already know each other. On the other hand, we often treat each other as brothers and not only band members and from time to time it can mess the things up, but undoubtedly the fact that we are a family helps a lot on the band's interation issue. 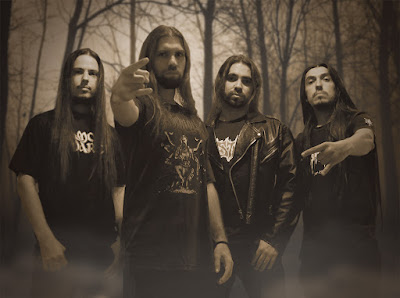 From left to right:  Max, André, Adauto and Yuri.


III. Now, in terms of musical influences, what sound references each of you bring to Vulture?
André: I've always been very attached to 90's Death Metal, then Icould put as my main influencing bands like Hypocrisy, Deicide, Sinister, Morbid Angel, Malevolent Creation and others; however, we (I think this could be told by all band members) always listen to variations of metal styles like heavy, thrash, doom, black, but always seraching for an specific taste we have in common. I recently listened to more technical Death Metal side bands that my brother (Adauto), for example, doesn't like so much. But I think that these differences and range of styles that Death Metal involves have shaped our course to this specific style.

IV. A personal curiosity I have is about bands is about logos. How was to create a logo that really represents Vulture?
Adauto: The first was handmade , using pen only and it ended up very rough. When Lucas, our first bass player, joined the band, he was doing a Corel Draw course and decided to make a vector version of it which is pretty much almost the same version we use today. In 2004, I restyled it by decreasing slightly the height of the V and the E, this made the logo more proportional horizontally, but is still the same created by Lucas in 1996.

V. Metallum informs us that the central themes of the Vulture lyrics are death, violence, anger, and religion, under this latest theme I mentioned, I can highlight the incredible lyrics for "Abençoado Seja o Homem Ateu". Why these topics were chosen to fill the songs in Vulture's death metal style?
André: It is usually Adauto and Yuri who write the lyrics, and they generally reflect everyone in the band's thoughts when it comes to injustice and slavery promoted by religions and corrupt politics of the country; it's a way to express this anxiety that we witness on a daily basis. However, in other lyrics you can see a more personal character that represents a little bit more their life point of view.

VI. Vulture released some demos before the first full-length album. They were amazing works in which I highlight 'A Call for the Ancients' demo. How was the composing and producing processes of these first works?
Adauto: I've always loved to compose and, from the beginning of the band, I've ended up putting this responsibility on me. So I composed the songs at home and took them to the band to see what they thought of them, to fit with the drums and then finish them with everyone. I used to fit lyrics brought by Marcelo and Felipe, Lucas used to fit his, and we seem to work that way until nowadays, and to add something, today I write some songs with Yuri and sometimes he already has some songs ready and he brings from his house.
"A Call for the Ancients" is perhaps the most important material of the band, because it was with this work that we come to Vulture's identity. It was a milestone for us, all the material released after "A Call for the Ancients" contains traces of it, of course we are evolving all the time, just adding new elements, but its guitars, its melodic passages, its drums variations, mixing brutality and cadence are the basis of our music today. We love this album and we plan to record it again in the future.

VII. You are from Itapetininga - SP, right? What do you think of the underground metal scene in São Paulo?

André: I've always particularly enjoyed São Paulo underground scene, but we've always dealt with places that filled the house and others who had smaller audiences, as well as being something that also depends on the festival organization itself; then somehow I think it was always very varied. Recently, there have been a very large drop on the public's presence in the cities of São Paulo and not only in São Paulo, but in other states as well. I think this may be due to the offering of more and more international shows in Brazil than were common in the past and have recently been many cover bands nowadays; the interesting thing is that this situation ends up making a selection of people who really enjoy and support the underground and the ones who aren't more than just "passing" through the metal scene. 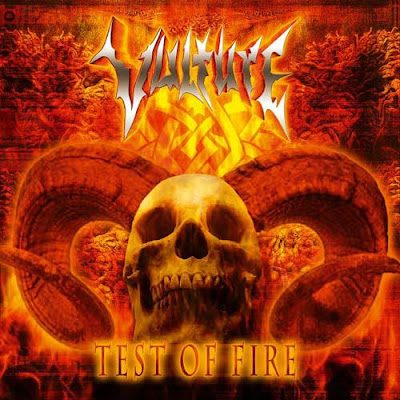 'Test of Fire' has one of the most beautiful artwork I've ever seen for a band's first full-length.

VIII. The first album Vulture was released in 2005. How was to compose, record and release 'Test of Fire'?

André: We were very excited to launch the Debut and we've been working on the songs from the last recorded Demo (Hellraised Abominations). Adauto brought the compositions at the rehearsing sessions and worked on the songs arrangements, which includes recording with some rough microphones at the composition step (laughs). I recorded the drums in a single weekend at the studio and as I did not have much notion of recordings, we use the very studio drums; and some vocal lines and lyrics were changed during the recording itself, so it was done in a rush, but rather we enjoyed the result and went to some shows on this album, back then in 2005.

IX. You have traveled some cities in Brazil doing shows for what we've researched. How was that experience for Vulture?

André: It was a phenomenal experience! Everywhere that we went, we were well received and made many friends, and knew some excellent local bands. It is a unique experience.
Adauto: The coolest thing is that you end up making true friends and this friendships can be perpetuated for many years. Previously, we maintained contact through letters, today through social networks, and it is always great to reconnect with those friends when you return to play in their city or even when we enjoy together at some festival. 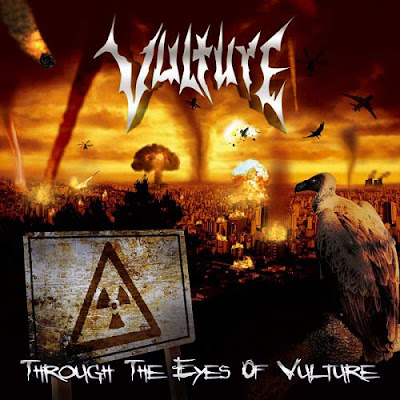 Their second full-length, 'Through the Eyes of Vulture' brings us this interesting artwork.


X. ‘Through the Eye of Vulture’, released in 2008, was the band's second full-length. How was to produce this work?
André: Well, at that time each of us were living at a different city, but the composition and recording processes were pretty similar to the “Test of Fire” ones. The difference is that we were more prepared and with a little bit more experiences on our luggages before going to studios.
Adauto: In the composition, the technology made it much easier after 2002. Previously to create the guitar arrangements, I recorded them again and again bases on a K7 tape and had to stay the whole time back, it was a pain in the ass, not to mention the quality that was sucks. When I started composing "Test Of Fire",  I was already using computers to record some things, the quality was not as good as it is today, but already made my life easier. The composition technique remains the same as ever, what is dfferent is that the tools we use to compose have improved. 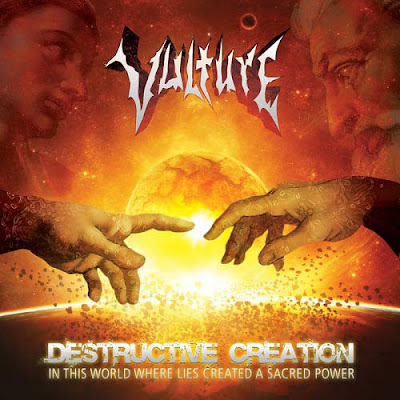 The third full-length work of Vulture, 'Destructive Creation', shows itself pretty amazing even by its cover art.

XII. The latest work of Vulture is the album ‘Destructive Creation’, right? How was to compose and release this masterpiece in 2012?
André: 'Destructive Creation' was a really different experience from the other albums, because we've decided to do the recordings ourselves. So, we had to learn how to deal with the many studio softwares, we had to learn a little more about recording and mixing. We were taking the band's things with a slower pace, divergent opinions, and so the production was pretty difficult, but we've ended being very satisfied with the results. 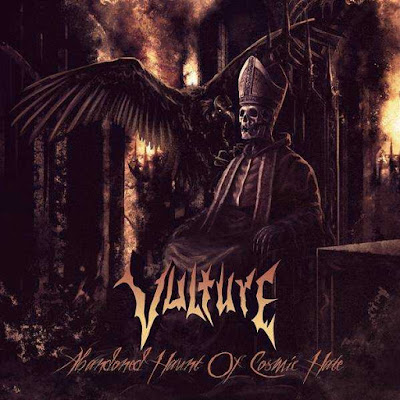 The most recent work of the band is 'Abandoned Haunt of Cosmic Hate', which is a full-length that came out before we've ended this interview process with the bandmates.


XIII. How would you classify Vulture's musical evolution since its first demos until ‘Destructive Creation’?


André: I would classify our musical evolution as natural, because we are constantly acquiring new musical concepts and influences united with our personal experiences by everything we go through that end up forging our music. I would say that we are expressing on the songs what and where the courses of our lives take us.

XIV. Now, to end up our conversation, I would like to thank you guys again for your time and consideration and to also wish all the best to each of you and to Vulture. I let this final space with you guys!
André: I would like to thank Oroborus Blog for this interview opportunity and the possibility of showing our work! We've just released our latest album, called “Abandoned Haunt of Cosmic Hate”, so if you want to know us more or even buy our merch, please follow us up at social networks! Thanks and stay underground!
Adauto: I thank you for the space, for the support and for the patience! Hugs to you all!