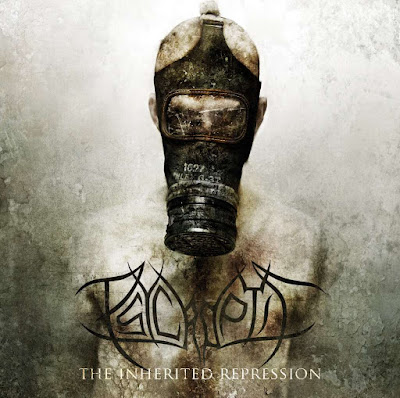 Tasmania, the birthplace of this band called Psycroptic. This is an awesome band that bears its Technical Death Metal in a chaotic, poetic and deadly form.

Since 1999, the band has the great sound that is still getting fans all over the world. They always show themselves as complete as possible, they pay attention to every point, to every second of a song and to every single detail of their music, because even their gear would be worth to somehow be framed at a museum.

'The Inherited Repression' was the album that soon showed by its cover art that the band was trying to overcome everything else they did in the best and they actually succeeded. This work, released via Nuclear Blast Records, made the band bet on 9 great tracks. Psycroptic wasted no time in showing that their quality goes from the first second of the first track until the last song's last minute.

"Carriers of the Plague" beautifully opens the album at its most atmospheric form. At the beginning, this track can show us the excellent work of their drummer when he explores each part of the drums he can, with no repetitive ideas by knowing how to use double pedals. It gives to the track a heavy atmosphere and that makes the earth shake. The bass is totally clear, you can listen as it flows with the other instruments and it also works as a good basis for a more open vocal. Every single thing mentioned before make this song even more flawless.

With this master level, the band starts the album as best as possible. Not satisfied to blown up their listeners with the first track, here come the second one: "Forward to Submission" which begins giving a highlight for the drums, while gradually all the instruments come up and get in tune. The guitar features a beautiful form to this song once the riffs sound very well thought out. Also, all those riffs re not necessarily focused on bringing an absolute overwelming weight to this song's musical creation.
The vocals can explore all its feelings and leave it totally high and impactful. This guttural style is that one that blends perfectly with the bass and makes this song a worthy work from this beautiful album.

The living energy appears on the track "The Throne of Kings" which begins with a guitar pulling the audience up for a massive wall of death. The double pedal is much more intelligently explored in this track and it is the perfect combination of plates well used and blast beat.
At every moment, you can notice the guitar growing and creating a very smart line that can always explore the energy and adrenaline. The greatest weight is up to the vocals that can be destructive from half until the end of the song.


Psycroptic shows it qualities in a interesting manner. They show an excellent set of well-played and well-done vocals, this all means that separately each musician can have their highlight time even when everyone is playing together. An excellent band that always show something that will stick to your mind.