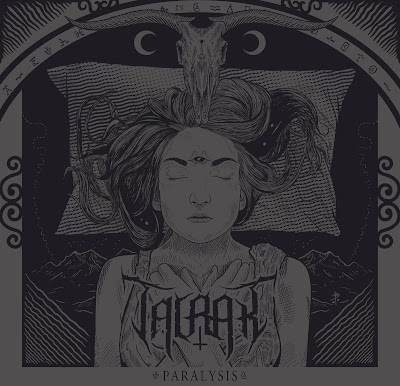 
Here is Talrak's first work and its melodeath with black metal traces are pretty well-shown. Launched in early May, via independent, the conceptual 'Paralysis' brings an almost mystical and discredited by many phenomenon: sleep paralysis.

Before the ears perceive sound, the eyes perceive the cover art and it's worth giving the fair attention this particular one deserves. The choice of designer Marcus Zerma by using gray as the only color was extremely on point because it shows very well the phenomenon's atmosphere. The atmosphere that it passes us is impactful, but also serene. It's like a scene drawn on a tarot card, beautifully adorned as it is on a cameo. The girl's expression is quiet, her "external" eyes closed indicate that she sleeps, her third eye open indicates that dream. Yes, she sleeps and dreams, but the scenery around almost prove us that she somehow levitates, corroborating with the testimonies on this phenomenon.

Now, let's talk about sound. A good instrumental track as intro is able to insert the listener into any desired ambience, but it takes mastery to achieve such an effect. "Prologue" is this effective. Ethereal, almost alien are some of the terms to define it. Its riffs mess up someone's ideas in the fluid space and time that the listener runs throughout this short song. Fluid as these dimensions assemble, it seems a reality in which the listener is being intrinsic to someone's dreams.

"Symbolizing Artifacts" appears without warning. The double pedal in this range comes with such cadence and give the wanted movement to the dense and dark atmosphere created by "Prologue". The vocals, always in tune, come at the right time. The music grows to a certain maximum and then goes back to the original melody without losing its power. The last riffs almost make it possible for the listener to feel acid running through his/her skin (Reference to this lyrics' part: "Let me feel the acid running through me").

"Ancient Etruria" totally breaks the atmosphere created by the two previous songs and brings its own. Lightness and mystery share space in this track. It's like, locked in your room, you wake up from a dream in which you wander through a dark forest under blue moon and heavy snow. The song accompanies you in the happiness of such a nice dream, but then it makes you look out to the window, which seems so strangely wide open and soon you envision one of your shoulders and on it mysteriously tiny snowflakes melt down. 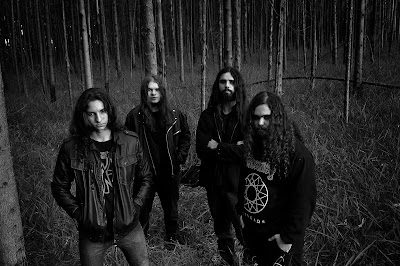 
The fourth song is undoubtedly the best of 'Paralysis'. Killer intro, with distortions at the right spot. This right spot in a band in which the line between black and death metal is tenuous. The two guitars are presented very well matched throughout the whole song. Bass gives the recquired depth to follow the harsh/guttural lyrics so sharp and flawless done by the vocalist (reference to the chorus: "Taste of the killing, smells of blood / The last breath, make those blood mud"). The drums appear with the power to destroy you as quickly as possible. That's because you only feel it vibrate through some insane double pedal and then dishes, both well interspersed. Millimeters separate "Pleasure of Unfair" and perfection and they are the unfortunately few minutes of this song.

Finally the selftiled song arrives. "Paralysis" brings to the drums a chance to realize a very heavy intro. And so, it endures, stormy, restless, but it is dying by well-done fade out before it suddenly and completely disappears, as the exact modes as people say that occur during the sleep paralysis phenomenon. The emphasis in this track is clearly for the vocals, because in this track have almost a poetic guttural description of what happens in this paralysis experience. A good example is the chorus: "Every second, is like a century / Drowned and raped mentally / Every second, is like a century / Strangled and hanged with intensity."

"Cursed By the Real Vision of Knowledge" is one of the most death metal tracks of the album. Starts in direct riffs, it becomes very melodic to then enter the guttural. The constant exchange of time in this track, makes it dynamic enough to not soak the listener. Especially the guitar solo, which is short but very well scored to the song's final seconds. Taking reference and poetic license with the refrain: our mind is twisted and gnarled by the track, but we cannot see the destruction because, here again, we have a too short song for the quality it presents.

The last song arrives. "Inquisition Philosophy" comes to close the EP with all the weight that a last song usually has. This track merges between being more purely death metal and melodic. And when it's melodic, it is almost flawless. It seriously featured invaluable highlight to the solos from the middle to the end of the song. Main and backing vocals were very well used in this song. The final seconds of "Inquisition Philosophy" take up some of the same atmosphere created by "Prologue", only that it's much more brutal, aggressive than the intro song.

Anyway, there are bands that are amazing since their early works. This is the case of Talrak because 'Paralysis' has shown a really great start. May Talrak's future works have longer songs and continue the way the last track of the EP says: "Resist ... Exceeded ... Improving ... Rising ...".