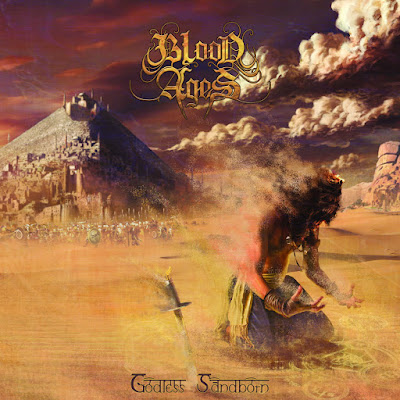 Knowing how to be unique is something super simple to this new band. Blood Ages appears bringing his latest release in 2016, having only one previous album, entitled 'At the Height of the Storm' that have already shown the power of the band in a great way, but nothing as impressive as 'Godless Sandborn'.

More than just an album, 'Godless Sandborn' manages to stick to your mind and penetrate your blood, showing a totally compatible sound with its mythology and Orientalism themes.The band's melody construction is really good. Drums always Death Metal styled, always bringing a total chaos atmosphere with double pedal played very quickly on some tracks, throwing you to a world of poetry, papyri and sand dissolving nightmares.

"He Who Came To Defile The World" is the more impactful way that the band show its Death Metal dense side. Bass appears extra charged, taking you from body to soul and leading them to the tombs. A great music that can show more focused side within the genre.

"From The Void To The Throne" can transmit by its inicial seconds how grand it is. This track is showing the monumental world of the band's Orientalism themes. A guitar very well used and managed to show its sharp tone by making the perfect tune that plays along with the drums plates, getting a more open air to contrast with the growls in the vocals.

No song in this album can best represent what this band is than "The Ritual Soil Of The Crawling Chaos" that carries an excellent introduction, showing how they very well thought-out when they created it.Strong and well insulated beats make the atmosphere increasingly charged. Bass creates a basis for the birth of darkness, guitars gradually appear and manage to show a beautiful an well employed side with the drums, ceasing to be shy on the track. This is a worthy and awesome song from its beginning to its end. "The Ritual Soil Of The Crawling Chaos" can within its eight minutes not be boring at any time.

Near to its end, "The Ritual Soil Of The Crawling Chaos" takes the hate and shows the dense guttural that can at times be close and others be driffting to reach the pig squeal style, suprisingly good. This certainly is a great band which can always surprise its listeners.


Mighty Music never hit this well with a released work. Blood Ages really is a band that will always bring great music quality. Blood Ages is that rare kind of band that with only two released works has that professional attitude that represents and honors the real worlds they made up with their lyrics.