I.                   Hello, Abstracted! First of all, I would like to thank you guys for this interview opportunity. How was to search for a name that fit well with the band's ideas and sound proposal?

Rosano Pedro Matiussi: Well, we thank you! Congratulations for your fantastic work on this blog, to put some spotlights on the "hidden" underground bands.
Well, the band's sound proposal has always been to compose a different and complex sound. I saw  "Abstracted" on a song by the Swedish Melodic Death Metal band Scar Symmetry, then I thought it would be the ideal name, once this one passes on abstraction, complexity and unpredictability ideas.


II.                Can you tell us a little about Abstracted's formation history? And what musical influences each of you bring to the band?

R.: Abstracted was born in 2014, after our previous band, Nyth, ended. The members of Nyth were me (Rosano), Alexandre, Riverton and Vinícius Santiago. When Vinícius left, I took some old songs I wrote two years ago and called Guilherme to play guitar on the band. And since then, we didn't stop. 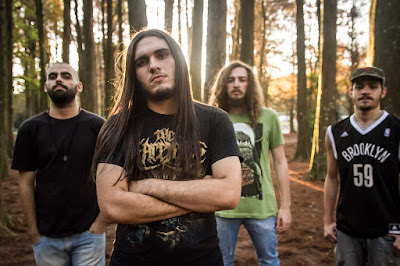 III.             One of the most important details when it comes to a band, besides of course its sounding, is its logo. How did you find the one to fit perfeclty to Abstracted?

R.: It was a delicate work to search and filter which artists and their works were compatible with the band's idea. Then, we found Carlos Fides' works, an artist who had already designed André Casagrande's EP artwork.  Carlos had already worked with some Metal big shots such as Evergrey and Kamelot. When we tried to contact him to design our visual identity, we gave him our fully consent to create, to put his own identity on what would turn out to be Abstracted's new face, and, at the end, we thought he executed his work with mastery.

R: It was a very different experience. We were a little bit apprehensive about the technical level of our songs which could make us not be able to play live what we've written, but after all, it went well and the folks dug into it.

R: I believe that it's every band dream: to be recognized by the honest work we do. We don't have that childish presumption to become rockstars or live on Abstracted music. Each of us has jobs and colleges. We keep our both feet on the ground about this issue, but to play on a great festival side by side with great bands would be our common goal.
I, personally, would like to share stage with Meshuggah, Opeth, Evergrey, Obscura and Monuments. 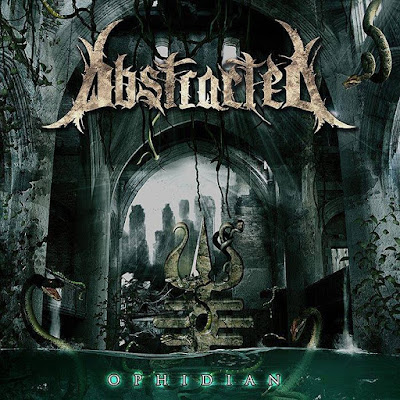 
VI.             Abstracted's first work was ‘Ophidian’ EP, released in 2015. With four awesome tracks, two of them – “Fleshmade Canvas” and “Cosmic Dust” - have featurings of André Casagrande and Michael Stancel and Greg Burgess (from the American band Allegaeon). How was to record this EP? And what about its artwork?

R: Thanks! Well, the recording process is pretty tiring, but it's a great experience. The creative and composition processes at the studio are fantastic. It's there at the studio you, a songwriter, have the chance to turn yourself into a mere listener, and then you finally have the chance to appreciate what you did. Greg and Mike were very thoughtful with us. We invited them in a hurry, because we were at the mixing step already and they handed us back the solos in five days. They're amazing guitar players, actually they're amazing people. With André, well, he used to record at the studio we were also recording the EP. His work is fantastic and when I listened to it, I knew it would perfectly fit to 'Fleshmade Canvas''s solo.

About the artwork, we've already had an idea around the name “Ophidian”. There is a parallel between the title and the message proposal on the EP. The lyrics have a misanthropic hint. At the cover art, there are many snakes on a temple around Shiva's, Hindu god of destruction, trident. This can be understood as something roughly said as: "The treacherous human being lives in a constant state of destruction worshipping".


VII.          On ‘Ophidian’'s four tracks the language used is English. Do you think about singing in Portuguese one day?
R: No, I think Abstracted sounds better in English. We intend to leave it that way.


VIII.      Researching for the band's information, we found Abstracted's attendance on 300 Tiro por Minuto Fest. How was this expericience for you guys? And how would you classify Sao Paulo's underground metal scene?
R: The 300 Tiro Por Minuto Fest was the biggest responsible for Abstracted existence. We've played twice at that festival and they were both amazing times. The underground metal scene hides lots of cool stuff and it gets buried even deeper because usually there are so many bands. Honorable mentions to the AllKings and Inversa bands. 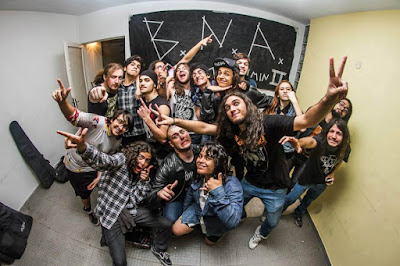 Abstracted was at the second edition of the fest 300 Tiro por Minuto. Sharing the stage with Beyond Samsara, Fatal, Brutal Noise Attack and Shallow Void.
Photo by Bruno Dinamarco

IX.             Still on the underground issue, what bands would you recommend to a metal fan?
R: Greatness Design, The Ritual Aura, Ne Obliviscaris, Gorod and Ever Forthrigh. These are the ones I most like these days.

R: At the moment, we are preparing 'Ophidian''s successor. We have circa seven songs done already and they're all going to be reassessed by each member of the band. We believe that until 2017's first semester, we will have our first full-length released for everyone's joy.

XII.          Now, to end our conversation, I would like to thank you you guys for your time and consideration. We wish all success to each of you and to Abstracted. This final space is for you!

R: We thank you too for this opportunity, thank you for such a nice reception at your blog. It is always a pleasure! Also thank you to everyone who supported us through these ceaseless years of hard work and please stay tunned for the auspicious news coming up.